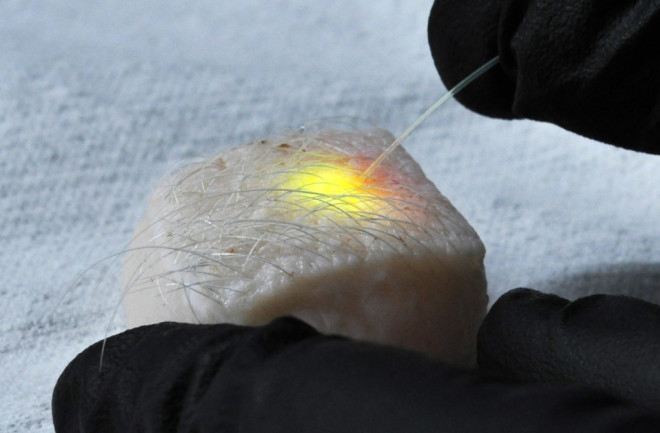 Inserting an optical fiber into a piece of pig’s skin causes fat cells to light up. (Credit: Matjaž Humar and Seok Hyun Yun)

In the last few decades, lasers have become an important part of our lives, with applications ranging from laser pointers and CD players to medical and research uses. Lasers typically have a very well-defined direction of propagation and very narrow and well-defined emission color. We usually imagine a laser as an electrical device we can hold in our hands or as a big box in the middle of a research laboratory.

Fluorescent dyes have also become commonplace, routinely used in research and diagnostics to identify specific cell and tissue types. Illuminating a fluorescent dye makes it emit light with a distinctive color. The color and intensity are used as a measure, for example, of concentrations of various chemical substances such as DNA and proteins, or to tag cells. The intrinsic disadvantage of fluorescent dyes is that only a few tens of different colors can be distinguished.

In a combination of the two technologies, researchers know that if a dye is placed in an optical cavity – a device that confines light, such as two mirrors, for example – they can create a laser.

Taking it all a step even further, our research, described in the journal Nature Photonics, shows we can create a miniature laser that can emit light inside a single live cell.

We made our lasers out of solid polystyrene beads ten times smaller than the diameter of a human hair. The beads contain a fluorescent dye and the surface of the bead confines light, creating an optical cavity. We fed these laser beads to live cells in culture, which eat the lasers within a few hours. After that, we can operate the lasers by illuminating them with external light without any harm to the cells.

Then we capture the light emitted from the cells via a spectrometer and analyze the spectrum. The lasers can act as very sensitive sensors, enabling us to better understand cellular processes. For example, we measured the change in the refractive index – the way light travels through the cell – while varying the concentration of salt in the medium surrounding the cells. The refractive index is directly related to the concentration of chemical constituents within the cells, such as DNA, proteins and lipids.

Further, lasers can be used for cell tagging. Each laser within a cell emits light with a slightly different fingerprint that can be easily detected and used as a bar code to tag the cell. Since a laser has a very narrow spectral emission, a huge number of unique bar codes can be produced, something that was impossible before.

With careful laser design, up to 1 trillion cells could be uniquely tagged. That’s comparable to the total number of cells in the human body. So in principle, it could be possible to individually tag and track every single cell in the human body. This is a huge leap from cell-tagging methods demonstrated until now, which can tag at most a few hundred cells. So far we’ve tagged cells only in Petri dishes, but there’s no reason it shouldn’t also work for cells within a living body.

Instead of a solid bead, we also used an droplet of oil as a laser inside cells. Using a micro pipette, we injected a tiny drop of oil containing fluorescent dyes into a cell. In contrast to the solid bead, forces acting inside the cells can deform the droplets. By analyzing the light emitted by a droplet laser, we can measure that deformation and calculate the force acting on the droplet. It’s a way to get a very precise picture of the kinds of mechanical forces exerted within cells by processes such as cellular migration and division.

Finally, we realized that fat cells already contain lipid droplets that can work as natural lasers. They don’t need to eat or be injected with lasers, just supplied with a nontoxic fluorescent dye. That means each of us already has millions of lasers inside our fat tissue that are just waiting to be activated to produce laser light. Next time you’re thinking about trimming down, you could just reconceptualize your body fat as a huge number of tiny lasers.

Our new cell laser technology will help us understand cellular processes and improve medical diagnosis and therapies. They could eventually provide remote sensing inside the human body without the need for sample collection. A cell is a smart machine, equipped with a computer with “DNA Inside.” Specialized cells, such as immune cells, can find the disease and site of inflammation, carrying the laser to the target for laser-based diagnosis and therapies. Imagine rather than a biopsy for a lump that doctors suspect to be cancer, cell lasers helping determine what it’s made of. Cell lasers also hold promise as a way of deliver laser for therapies, for example, to activate a photosensitive drug at the target to kill microbes or cancerous cells.