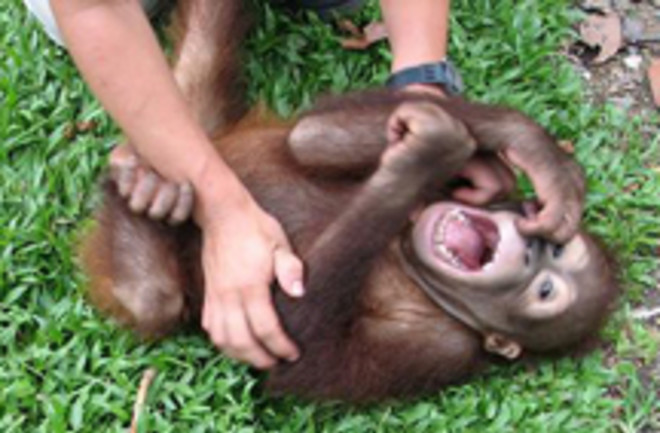 It’s hard to imagine having more fun in the name of science: In a new study, researchers tickled young chimpanzees, bonobos, gorillas, orangutans, and even a few human babies, and recorded the vocalizations that resulted. Primatologist Marina Davila Ross wanted to examine the evolutionary history of laughter, so she and her colleagues recorded the sounds produced when they tickled 22 great apes and 3 human babies, picking the usual sensitive spots: armpits, palms, feet, and necks.

Scientists have known that great apes vocalize when tickled at least since Charles Darwin’s time. But it was unclear whether these sounds were actually related to human laughter. Now, researchers … have concluded that laughter has been evolving in primates over the last 10 to 16 million years, since at least the last common ancestor of humans and modern great apes [Wired.com].

In the study, published in Current Biology, 11 auditory variables were measured for the 25 experimental subjects – variables such as the length of the vocalization, the in-and-out breathing patterns and the vibrations of the vocal cords. All those numbers were fed into a software program that looked for relationships between the data points. Then the computer constructed a phylogenetic tree (that is, the “family tree”) that fit the data best [MSNBC blog]. The analysis determined that human laughter is most similar to that of chimps and bonobos, the two apes most closely related to us. The laughter chart revealed that next in line, in terms of similarity, are gorillas, followed by orangutans and siamangs, which are lesser apes. “These results coincide with the genetic topology of great apes and humans,” Davila Ross said [Discovery News].

During the course of the study, Davila Ross also became convinced that it’s not anthropomorphic to characterize the great apes’ vocalizations as gleeful. The laughter “seemed like an expression of joy,” said Davila Ross…. “It seemed to me that the subjects enjoyed the attention and the positive interaction with their caretakers, and did not show much attempt to leave when the tickling session was over” [HealthDay News].