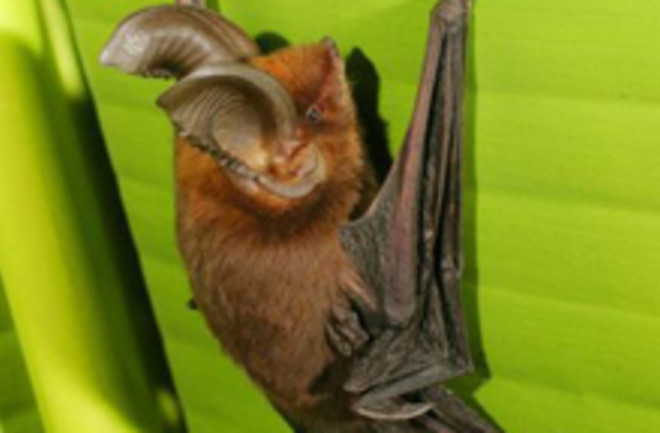 You know the prevailing posture of a bat in repose—hanging upside down. All but six of the known 1,200 bat species in the world roost with their heads down, but now naturalists have had the chance to study a Madagascar bat that not only roosts right-side-up, it hangs onto surfaces in a totally unexpected way. Myzopoda aurita is endangered and listed as vulnerable to extinction. But a team lead by Brown University's Daniel Riskin got to travel to Madagascar and found colonies of the bat in newly grown forests. There they found that the bat roosts right side up by deploying a kind of liquid adhesive. This was a surprise. As you can see in the image, Myzopoda aurita appears to have sucker-type feet like many bats do. But by demonstrating that the bat could stick to both surfaces with tiny holes and surfaces with those holes covered by tape, the researchers showed that it wasn't using suction to stick (if it was, the bat wouldn't be able to create a seal and therefore couldn't stick to the holey surface). They also discovered a nomenclature problem on their hands. From Science Daily:

While the finding settles the question of how the bats roost, it means science has misnamed the bat. "Myzopoda literally means 'sucker foot,'" Riskin, the paper's lead author, said. "You can't change Latin names, so it's stuck with it."

For the whole story on Myzopoda, see "Spiderman's Bats

80beats: Madagascar Chameleon Makes the Most of a 4-Month Life