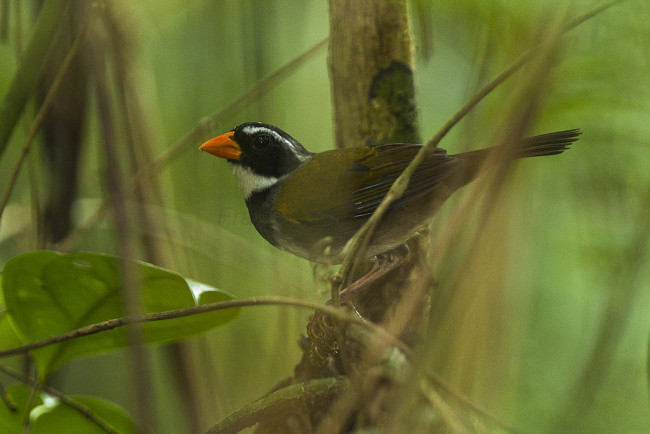 Same-or-different is the concept behind the most basic toddler games. We encourage kids to put the square block in the square hole, find two cards that match, place the cow in the cow-shaped puzzle slot. But in nature, the cow-shaped slots are harder to see. Deciding whether two animals are the same or different species frequently causes debates among scientists. In Central and South America, researchers tried to find the differences between many pairs of closely related birds by simply asking the birds. The results suggested they'd found 21 new species. Most bird scientists follow the rule that if birds don't usually mate with each other, they're different species. Populations of related birds that live in slightly different places may be in the process of evolving into two separate species. To decide whether relatives living apart from each other are the same species or not, scientists often compare recordings of the birds' songs, write Benjamin Freeman of the University of British Columbia and his coauthor, Graham Montgomery of Cornell University. Another, more difficult way to ask the question is to lug speakers into the wild and play a recording of one bird's song to the other bird. How it reacts will tell you whether the bird thinks it's hearing its own species or not. Freeman and Montgomery decided to compare the two methods of telling bird species apart. As part of a larger study, they went to Panama, Costa Rica and Ecuador and looked at 72 pairs of birds that are closely related but live apart. Some of the pairs in the study are already categorized as separate species, while others are only "subspecies." The researchers searched the forests for the birds they were interested in. When they found a (usually male) bird defending a patch of land, they set up a wireless speaker a little ways away. Then they played recordings of two different songs. One song came from another bird in the target bird's local population. The other song belonged to a bird from the related but geographically separate population. If the bird heard another bird of its species singing nearby, it ought to respond by aggressively approaching the speaker. Freeman and Montgomery only included experiments where the bird reacted this way to hearing another member of its local population. If the bird also tried to chase off the speaker when it played the other recording—the song of a bird from the geographically separate population—then the researchers assumed the target bird considered that bird the same species. In other words, a bird reacting to the speaker meant the two populations were one species. A bird ignoring the speaker meant they were different. Freeman and Montgomery say this is actually a conservative way to judge whether birds belong to the same species or not. When a territorial bird is chasing off a challenger, mistaken identity isn't a big deal. But when a female bird chooses her mate—often by his song—she needs to be picky. So female birds are likely more selective about which songs they consider "same" or "different," the authors say, and those mating choices are the ones that can drive two populations apart evolutionarily. The researchers also analyzed the acoustic traits of songs from the 72 bird pairs. Their software measured things like high and low frequencies, average note rate, and average length of notes. They found that when a pair of birds had very different songs according to the computer analysis, one bird was also likely to ignore a recording of the other. But when the differences between songs were smaller, the acoustic analysis didn't say much about how birds would react to each other. Based on the birds that ignored each other's calls in the study, Freeman and Montgomery say they found 21 bird pairs that ought to be different species but are currently classified as the same. This means scientists shouldn't rely on acoustic analysis to judge whether birds are the same species or not, the authors say. Whenever possible it's better to, in their words, "ask the birds themselves."

Image: An orange-billed sparrow, by Francesco Veronesi (via Flickr). This is one of the species that, according to the study, ought to be two.