In October 2009, a man and two women walked into a renowned Los Angeles restaurant called The Hump and ordered some sushi. This seemingly innocuous act was the start of a fascinating chain of events that would involve hidden cameras, genetic sequencing, a few arrests, and the first solid proof of an illegal international trade in whale meat.

The man in question was Charles Hambleton, a keen diver and assistant director of The Cove

, an Oscar-winning documentary that exposed the annual killing of Japanese dolphins

. Hambleton had heard that The Hump was serving whale meat and decided to investigate. He and his companions ordered an “omakase meal”, a challenging assortment of different meats chosen by the chef, only offered to the “adventurous”, and priced at a hefty $800. Sure enough, the platter included four strips of whale sashimi. The receipt said as much, but Hambleton wanted proof. When the waiters and chef weren’t looking, he slipped a sample of the meat into a plastic bag and sent it to Scott Baker

from Oregon State University. By sequencing the meat’s DNA, Baker confirmed that it came from an endangered sei whale

. In fact, the meat was an exact genetic match to products bought in Japan in September 2007. The whale in question must have been killed in those years during one of Japan’s controversial “scientific hunts”. From there, its meat had been illegally exported to the US, flouting a strict ban on the international trade of whale meat. Together with Cove director Louis Psihoyos, Hambleton took his evidence to officials from the National Oceanic and Atmospheric Administration

(NOAA). When the duo returned to California to attend the Academy Awards, they conducted their final stings. Psihoyos says, “Charles and I did two more operations to buy whale meat from the same restaurant with federal officials watching so we could establish a chain of custody.” The Hump was forced to close its doors a few weeks later. On 10 March 2010, federal prosecutors filed criminal charges against both the restaurant and its chef. 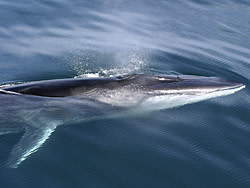 The Hump wasn’t the only restaurant to be stung by the team. They found whale meat being sold in other diners in LA and Seoul, proving that the international trade spanned South Korea as well as the US. The Seoul restaurant served no less than 13 whale meat products, which came from minke, sei and fin whales, and one Risso’s dolphin. Once again, genetic analyses revealed that the fin whale meat came from a single animal that had been caught in Japan and had been sold in Japanese markets since September 2007. Baker is just one of a wave of scientists who are using modern scientific techniques to track the trade of endangered species. Last year, Jacob Lowenstein found that some sushi restaurants were selling endangered southern bluefin tuna

to animals once photographed in India’s national parks. Needless to say, whale hunting is controversial

– it’s cruel and unethical to some, but economically and culturally necessary to others. In 1982, the International Whaling Commission

(IWC) set up a moratorium on commercial whaling that came into force in 1986. Both sides of the debate have pushed for the moratorium to be shifted, but Japan has neatly skirted around it by claiming to hunt whales for scientific research

says that it aims to provide “information on the role of whales in the ecosystem and the effects of environmental changes on whales”. It allegedly studies population structures, age and diet, although critics are hardly convinced. Baker says, “It is widely recognised that scientific whaling is primarily a front for limited (but expanding) commercial whaling.” And Psihoyos adds, “There has not been a single peer-reviewed paper the Japanese whalers have done since 1987, when their “scientific whaling” program began, to justify the killing of a single whale.” Under the banner of research, Japanese boats kill minke, Bryde’s and sperm whales, as well as the endangered sei and fin species. Meanwhile, whales are sometimes killed as “bycatch”, ensnared within fishing nets that target smaller swimmers. If caught in this way, their flesh can be sold commercially, and they sell very well. Despite this thriving national trade, it’s generally assumed that Japan’s slaughtered whales stay within national boundaries. The IWC regulates 13 species of whale and according to the Convention on International Trade in Endangered Species

(CITES), none of these species can be traded commercially between countries. Japan, Iceland and Norway have permits that allow for some limited trade between each other, but they’re absolutely forbidden from trading whale products with countries that don’t hold permits, including the US and South Korea. Nonetheless, this new study clearly shows that this legislation is being flouted. Both Norway and Japan keep DNA registers of whales that are killed for “scientific” purposes, or that are sold after being accidentally killed. You could easily work out if a suspicious product came from an authorised source by comparing it to these registers. But neither country makes their records freely available, even to the IWC’s Secretariat. Nor have they sanctioned market surveys to monitor the origins of whale products. Baker says that independent surveys and open access to the registers are vital for controlling trade and confirming that countries are staying within their catch quotas. “Like the smuggling of drugs, we cannot hope to stop illegal trade in wildlife,” he says, “but we can impose monitoring and inspection schemes to limit and prosecute these cases.” To that end, Baker’s team have submitted a request to the Government of Japan, via the IWC Secretariat, to access the country’s whale DNA registers. Reference: Biology Letters http://dx.doi.org/10.1098/rsbl.2010.0239