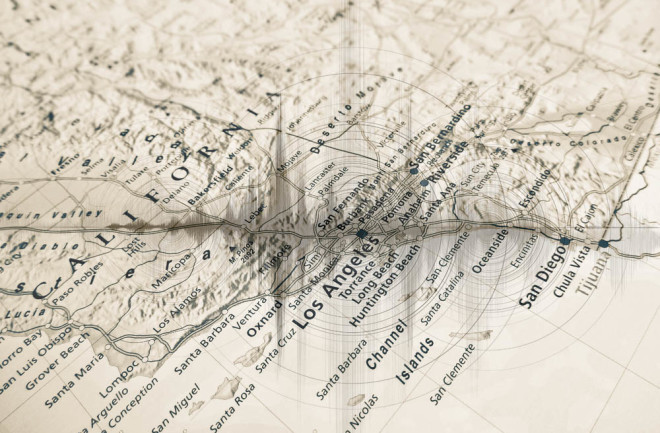 Scientists looked for tiny earthquakes that have hit Southern California in recent years and discovered a whopping 1.8 million that hadn't previously been recorded. (Credit: Varunyuuu & TonelloPhotography/Shutterstock) Southern California is famous for its sandy beaches, wine country, theme parks and Hollywood glitz. And also its earthquakes. Now, researchers have identified more than 1.8 million previously unknown earthquakes that hit Southern California between 2008 and 2017. The findings suggest these truly tiny earthquakes — as small as just 0.3 magnitude on the Richter scale — happen every 174 seconds, yet they're hardly felt on Earth's surface. “The goal was to produce a state of the art earthquake catalog for southern California,” said Zachary Ross, a geophysicist at the California Institute of Technology in Pasadena, who led the new research. “This catalog would then ... provide enough resolution to test important physical theories about earthquake triggering, nucleation and the geometry of fault zones.”

Massive, continent-sized slabs of Earth’s outer crust known as tectonic plates are constantly on the move. Although the tectonic plates shift at a sluggish pace of just two to four inches per year, the movement unleashes earthquakes. Large earthquakes — like the Gorkha earthquake that hit Nepal in 2015 and killed nearly 9,000 people — are the real hazards. But years can pass between one of these giant earth shakers and the next, making studying and predicting these catastrophic events challenging. Fortunately, for seismologists — the scientists who study the moving plates — earthquakes tend to follow a neat rule: the smaller the earthquake, the more often it happens. That means earthquakes reaching magnitude 7 might only happen once a year, but smaller earthquakes that hardly bump the scale happen all the time. The rule also means the records seismologists keep of earthquakes are “inherently incomplete,” according to Ross and colleagues, because lots of earthquakes go down that are too small for seismographs to detect as actual earthquakes. Instead these very small earthquakes just look like background noise. A more complete earthquake catalogue would help seismologists understand the physics underlying earthquakes better, which could improve predictions.

In the new study, Ross and his team exploited the fact that for every drop in earthquake magnitude, there are nearly 10 times as many earthquakes. That's 10 times more data to add to the record books that will allow seismologists to test hypotheses about earthquakes that would otherwise be impossible if they waited around for the big ones to happen. To catch these small earthquakes, the scientists compared continuous seismographic data in southern California from 2008 to 2017 to data from nearly 284,000 earthquakes they had on record for the region. The analysis detected more than 10 times as many earthquakes as was previously known for the region over the 10-year study period, the researchers report Thursday in the journal Science. Altogether, the Southern California earthquake catalog was missing some 1,620,000 earthquakes. “Our findings provide new insights into the locations and geometry of faults below the surface, the manner by which earthquake sequences initiate, and how earthquakes can interact with and trigger other earthquakes,” Ross said. “Ultimately we hope that the knowledge gained from these small earthquakes can be applied to reduce the seismic hazard from larger earthquakes.”