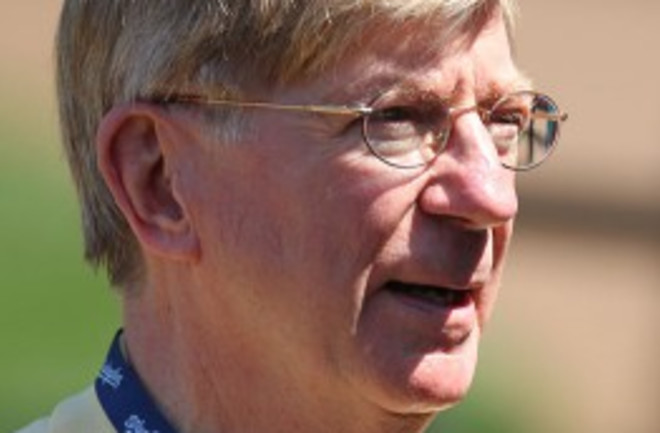 George "let me do the math" Will. Photo by Keith Allison In a recent opinion piece for The Washington Post, George Will decided to do a little math based on two "crucial and contradictory" statistics mentioned in the President's recent report: A. 20% of college women are sexually assaulted during their tenure at the university, and B. 12% of rapes are reported to law enforcement His overall message is that, clearly, women are lying about being assaulted to gain the "privilege" of victimhood, based on this mathematical argument:

The statistics are: One in five women is sexually assaulted while in college, and only 12 percent of assaults are reported. Simple arithmetic demonstrates that if the 12 percent reporting rate is correct, the 20 percent assault rate is preposterous. Mark Perry of the American Enterprise Institute notes, for example, that in the four years 2009 to 2012 there were 98 reported sexual assaults at Ohio State. That would be 12 percent of 817 total out of a female student population of approximately 28,000, for a sexual assault rate of approximately 2.9 percent — too high but nowhere near 20 percent.

Or, to put it into math equations:

which means only 2.9% of the 28,000 female students at Ohio State have been assaulted.

Therefore, the 20% statistic is far too high, thus women must be lying about assault.

Here's the thing: experimental design matters when it comes to statistics. There are several ways you can go wrong when interpreting statistics

, any of which can be accounted for if you simply pay attention to the science that generated them—which George clearly didn't. I could start by saying that only around 40% of college students finish in four years

, so limiting the math to four years is already problematic. But even without that, the real math adds up. Here's what Willy missed: 1. The number of reported assaults by the university in a given time period does not equal the number of reported assaults that have occurred on women enrolled in that university during that time period. That's because universities only report assaults that occur "on campus": literally on campus, on public property adjacent to campus, or in buildings owned by a student organization. So any assaults that occur at, say, a bar, during spring break abroad, or at a person's privately-owned apartment are not accounted for. According to The Sexual Victimization of College Women by the National Institute of Justice, Bureau of Justice Statistics

, only 33.7% of rapes occurred on campus. If we assume the figures are similar for sexual assault, that 98 reports = 33.7% of the total, thus Ohio State's women would have reported 291 assaults in total (to appropriate other authorities) from 2009-2012.

which means 8.6% of the female student population has been assaulted.

2. The 12% statistic applies to the reporting of rapes of college women to law enforcement (source

), not sexual assaults to college authorities. While George complains about the broadness of the sexual assault definition later on in his rant, the fact is, the 12% statistic can't be applied to all sexual assaults, as sexual assaults that don't end in forced penetration are much less likely to be reported. If we want to be more accurate, we can look at that same study mentioned in 1), which found that less than 5% of college women reported completed or attempted rapes. Which means that 291 (which we got from the 98 reports only being 1/3 of the total reports) actually = 5% of the real number of assaults.

which means 20.7% of the 28,000 female student population has been assaulted.

By the numbers, Ohio State's 98 reported sexual assaults on campus does translate to 20% of the female student population being sexually assaulted in their four years of undergrad. What I find distressing, though, about George Will's tirade is that when his numbers didn't add up, he didn't think critically about what the numbers mean and where they came from. He didn't research the source of the data or determine if they were compatible, and instead, he willfully tried to minimize the assaults that 1 in 5 college women say they have personally experienced (which, for the record, comes from several

.). He looked for a loophole, rather than applying critical thinking. And that's not even mentioning that he cherry-picked a single institution instead of looking at the total data, which is readily available from the U.S. Department of Education

. I don't know which is worse: if George simply doesn't have the critical thinking skills required to evaluate information, or if he intentionally ignores them so he can twist data to fit his predetermined viewpoint.