Saving Tasmanian Devils From A New Form of Life--Themselves 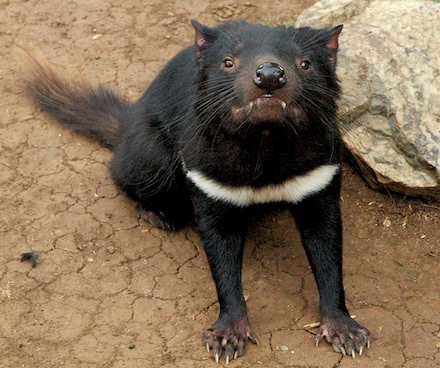 Tasmanian devils have given rise to a weird new quasi-form of life: a cancer that spreads from animal to animal like a parasite. In tomorrow's New York Times, I report on the latest analysis of devil's facial tumour disease, published in this week's Science. Scientists have now tracked down the cancer to its progenitor: nerve cells known as Schwann cells. Now scientists can use this evolutionary history to design diagnostic tests for the cancer and perhaps even vaccines. Let's hope they succeed--the cancer has wiped out 60 percent of all Tasmanian devils since 1996 and has the potential to drive the whole species extinct in a matter of decades. For more on cancer as a new form of life, check out my earlier blog post on the only other documented case in the wild: a tumor that jumps from dog to dog. (The one major update to that post is that it now looks as if the tumor escaped its original dog host thousands of years ago, instead of hundreds as previously thought.) While dogs and Tasmanian devils are so far the only known hosts to these sorts of cancer, free-ranging tumors may actually be more common than we know right now. They may be particularly likely to arise in small, inbred populations. The similar immune systems of these animals may be easy for the cancer to evade, allowing it to spread quickly. Another hint that infectious cancer isn't all that rare is the violence with which we reject transplanted organs. Why should our bodies be so well-primed to attack the cells of other humans? One possibility is that invasive cancers have been a long-term threat to the health of our ancestors. (And for more on cancer as an evolutionary disease, see my article in Scientific American, reprinted in