Saucy study reveals a gene that affects aggression after provocation

People seem inordinately keen to pit nature and nurture as imagined adversaries, but this naive view glosses over the far more interesting interactions between the two. These interactions between genes and environment lie at the heart of a new study by Rose McDermott from Brown University, which elegantly fuses two of my favourite topics - genetic influences on behaviour and the psychology of punishment. 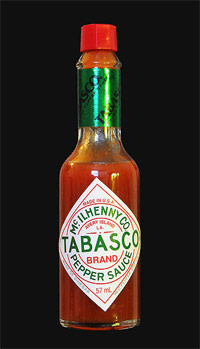 <Regular readers may remember that I've written threepreviouspieces on punishment. Each was based on a study that used clever psychological games to investigate how people behave when they are given a choice to cooperate with, cheat, or punish their peers.

McDermott reasoned that the way people behave in these games might be influenced by the genes they carry and especially one called monoamine oxidase A (MAOA), which has been linked to aggressive behaviour. Her international team of scientists set out to investigate the effect that different versions of MAOA would have in a real situation, where people believe that they actually have the chance to hurt other people.

MAOA encodes a protein that helps to break down a variety of signalling chemicals in the brain, including dopamine and serotonin. It has been saddled with the tag of "warrior gene" because of its consistent link with aggressive behaviour. A single fault in the gene, which leads to a useless protein, was associated with a pattern of impulsive aggression and violent criminal behaviour among the men of a particular Dutch family. Removing the gene from mice makes them similarly aggressive.

A few years ago, British scientists found that children who had been abused are less likely to develop antisocial problems if they carry the MAOA-H gene than if those who bear the low-activity MAOA-L version. An Italian group has since found the same thing. It is a truly fascinating result for it tells us that the MAOA gene not only affects a person's behaviour, but also their reactions to other people's behaviour.

But both studies had a big flaw - they measured aggression by asking people to fill in a questionnaire. Essentially, they relied on people to accurately say how belligerent they are and we all know that many people like to talk big. McDermott wanted to look at actions not claims.

To that end, she recruited 78 male volunteers and sequenced their MAOA gene to see which version they carried (just over a quarter had the low-activity version). The volunteers played out a scenario where they believed that they could actually physically harm another person for taking money that they had earned. Their weapon of retribution? Spicy sauce.

Use the Sauce, Luke

She told the recruits that they would be paid according to how well they answered a vocabulary quiz. They were allegedly paired with anonymous online partners, who would then decide how the jackpot would be split. In reality, their partner was a computer, the game was fixed so that all players in any given round earned the same money, and the computer would always choose to keep either 20% or 80% of the total.

When the volunteers were told about their share, they could punish their "partner" by forcing them to drink a teaspoon of unpleasantly spicy sauce. They had an armory of ten teaspoons of hot sauce and any that hadn't been used could be traded in for cash - that way, the players were actually forfeiting money in order to dole out retribution. This went on for four rounds, with a new fake "partner" on every one. (Incidentally, only 8 people were suspicious that they weren't actually forcing sauce upon a partner and they were excluded from the results. Everyone was debriefed later, for ethical purposes.)

McDermott found that the activity of the MAOA gene did affect the volunteers' propensity for punishment and its influence depended on how strongly they were provoked. When the fictitious partner took just 20% of the money, MAOA had little bearing on the volunteers' desire to punish. But when they lost 80% of their winnings, people with the low-activity version were more likely to mete out saucy punishment than those with the high-activity one.

The MAOA gene did have a more general effect - overall, those with the low-activity version behaved more aggressively than those with the high-activity one. And after the first round, even if their partner had taken a paltry 20%, the MAOA-L carriers were slightly more likely to use the sauce. So this variant seems to be linked to aggressive tendencies, but much more so after aggravation - a classic case of nature via nurture. 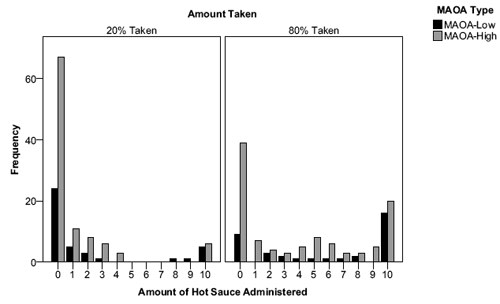 If anything, the experiment underestimated the true extent of aggressive behaviour among MAOA-H carriers. With a finite supply of hot sauce, and no option for buying more, McDermott had set an upper limit to aggressive behaviour, which many of the recruits eventually hit. Indeed, when 80% of the money was taken from them, 44% of the MAOA-L carriers used up their entire sauce supply, while just 19% of the MAOA-H carriers did.

You talkin' to me?

McDermott's study clearly demonstrates that the low-activity version of MAOA is linked to belligerent tendencies, which lead to actual aggressive behaviour in real situations. The reasons behind this link are still unclear, but an earlier study suggested that individuals with MAOA-L are overly sensitive to threats or challenges that other people would shrug off, and overreact to them.

They even have unusually high levels of activity in their dorsal anterior cingulated cortex (dACC) - a part of the brain that has been linked to feelings of distress after social rejection or confrontation. That gels nicely with what McDermott herself found - MAOA's influence on behaviour is stronger in situations when people have been provoked or challenged.

This fascinating work adds a deeper dimension to other studies that use psychological games to understand how punishment contributed to the evolution of cooperation. Influenced by their genes, some groups of people may use very different strategies than others and the relative success of these will depend on how frequently they are used in the population. For example, if everyone was a pacifist, carriers of MAOA-L might gain an advantage by acting more aggressively than normal (I stress again that it's a question of degree - MAOA-L carriers aren't destined to be violent thugs). But if everyone carried MAOA-L, its advantage would soon disappear.

Many studies tend to focus on "altruistic punishment", where people take a personal hit to punish others for the good of the group. But in this experiment, those who paid to punish received no returns on their "investment" - they were acting out of spite, which McDermott describes as the "neglected ugly sister of altruism".

Spite has been investigated recently in a study which showed that students from 16 cities around the world varied greatly in their tendency to punish others spitefully or "antisocially". That study attributed the differences to how the various societies felt about free-loading and how strongly respected the rule of law. But it would be equally interesting to see if the low activity version of MAOA was more common in some of these countries than in others.

More on genetic influences on behaviour