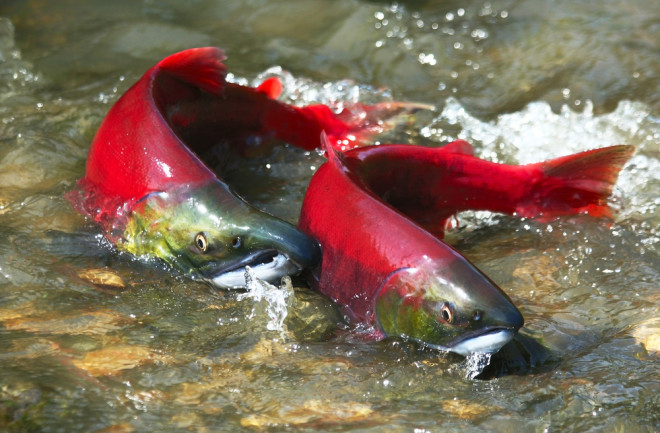 (Credit: Shutterstock) Many forces shape the planet’s rugged features: wind, water, fire, and, of course, salmon sex. That’s the conclusion from Washington State University researcher Alex Fremier and colleagues in a study that’s billed as one of the first attempts to quantify the earth-shaping power of spawning salmon. They titled their study, in part, “Sex That Moves Mountains,” and it’s a new take on the ways living things transform habitats.

Take Me to the River

Waterways reshape terrain through two primary means: erosion and depositing sediment. Erosion carves canyons and smooths bedrock, while sediment transportation changes the course of a river and deposits new, fertile land along coastlines. The amount of water, the flow rate and the size of sediment in a waterway all influence they way it re-contours the landscape. Spawning salmon can really muck things up by disturbing the sediment. Females “fluff” up the riverbed, loosening soil and pebbles to prepare their nests, or redds. The loosened sediment is more prone to being swept away by floods, exposing bedrock to erosion. And according to Fremier, they’re altering entire watersheds. Fremier and colleagues from the University of Idaho and Indiana University modeled changes in streams over 5 million years, and found that streams with spawning salmon saw lowered slopes and elevations over time, which has effects both upstream and downstream. Thousands upon thousands of salmon returning to nesting grounds is a force of nature, after all. "The salmon aren't just moving sediment," said Fremier. "They're changing the character of the stream bed, so when there are floods, the soil and gravel is more mobile." Intuitively, different species of salmon had different effects on their surroundings based on their size—bigger fish stir up bigger particles. Therefore, the researchers say, it’s possible to gauge the types of salmon in a stream by studying erosion rates and changes to the surrounding landscape. It’s not so different from understanding the dramatic impact beavers have on slowing water and creating floodplains. On the other side of the coin, waterways that see salmon populations disappear could undergo significant, long-term changes as a result.