Rotifers find answer to parasites by blowing on the wind 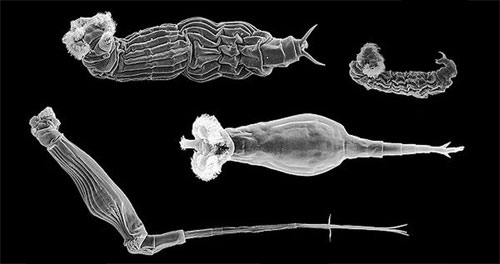 When our lives are in danger, some humans go on the run, seeking refuge in other countries far away from the threats of home. Animals too migrate to escape danger but one group - the pond-living bdelloid rotifers - have taken this game of hide-and-seek to an extreme.

If they are threatened by parasitic fungi, they completely remove any trace of water in their bodies, drying themselves out to a degree that their parasites can't stand. In this desiccated state, they ride the wind to safety, seeking fresh pastures where they can establish new populations free of any parasites.

This incredible strategy may be partially responsible for another equally remarkable one - the complete abandonment of sex. For over 80 million years, the bdelloids (pronounced with a silent 'b') have lived an asexual existence. Daughters are identical clones of their mothers[strike], budded off from her body[/strike]. No males have ever been discovered. For this reason, Olivia Judson once described bdelloid rotifers as an "evolutionary scandal". Their sexless lifestyles simply shouldn't work in the long run.

Ditching sex allows an animal to efficiently pass all of its genes to the next generation without having to seek out a mate. This should give asexual animals a big advantage but not so. Sex provides fuel for evolution. Every time two individuals meet in flagrante, their chromosomes are joined, shuffled and re-dealt to the next generation. In this way, sex begets diversity, remixing genes into exciting new combinations.

This diversity is a vital weapon in the never-ending war against parasites. Parasites, with their large populations and short generations, are quick to evolve new ways of exploiting their hosts. They could have their run of a genetically uniform population and soon bring it to its knees. A sexually active species is a harder target. With genes that shuffle every generation, new anti-parasite adaptations are always just one bout of mating away. And so it goes, again and again, with hosts constantly having to outrun their parasites and sex acting as the getaway vehicle.

So asexual reproduction, for all its immediate gains, should be a poor long-term strategy compared to the dynamic nature of sex. Bdelloids have clearly addressed this problem and thanks to the last few years of research, we know how. They have evolved ways of achieving every single one of the many benefits of sex, without actually doing the deed. Escape parasites? They've got that covered. Shuffle their genes? They do that too. Generate genetic diversity? Check. 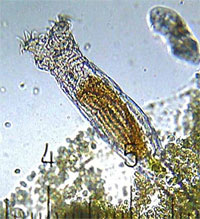 The latest of these studies comes from Christopher Wilson and Paul Sherman from Cornell University. They pitted rotifers of the species Habrotrocha elusaagainst a lethal and exclusive adversary - a fungus called Rotiferophthora angustispora, which only infects bdelloids. Once eaten, the fungal spores produce cells that threaten to devour the rotifer from the inside out within just 2 weeks.

But the rotifers have a defence. They can completely dry out their bodies into a dormant state called a "tun" and they can survive that way for up to 9 years. All it takes is a drop of water to revive them. The fungus isn't so resilient. Its spores are fractured and shattered by the same drying process that the rotifers actively initiate.

Without this drying defence, the rotifers were completely exterminated by the fungus. If they managed to turn into tuns, they gained a temporary reprieve, but if any individuals hadn't dried out in time, fungal cells soon emerged from their corpses and infected the rehydrated survivors. Only if the rotifers stayed dormant for over 3 weeks did they fully escape the parasites.

In nature, the tuns rarely stay in the same place. They're light enough to catch the slightest wind, which helps when fleeing from a waterborne fungus. To simulate these travels, Wilson and Sherman placed a heavily infected population in a wind chamber, with air currents approximating a light breeze. Sure enough, the dormant rotifers were blown into empty dishes around 30 to 40cm away and after a week, they were rehydrated. Fresh populations started thriving in 17 of the 24 new dishes and 10 of these were completely fungus-free.

This simple experiment shows that H.elusa can escape its parasite by hitchhiking to safety aboard the wind. In the experiment, the rotifers found safety from parasites after three weeks of desiccation or 30 metres of flight. In the wild, they can almost certainly travel further and dry out for longer. In fact, they are such efficient wind-riders that some species have spread all over the globe and they regularly turn up in samples of rain and wind.

It's not just the parasites they outrun - they also escape the drawbacks of their very asexual existence. Sexual animals need to keep up their liaisons to continually outmanoeuvre their parasites and predators. But rotifers, through their extreme abilities, can leave the arms race altogether, decoupling their fates from those of enemies that co-evolve with them.

That's not the only trick they have. Sex produces greater genetic diversity, but rotifers can do this through other means. The same drying process that allows them to blow away on breezes also breaks their cell membranes and shatters their DNA. That allows them to smuggle in genes from surrounding species. The gene pools of entire kingdoms are available to them. Today, their genomes are rife with foreign DNA from bacteria, fungi and even plants, many of which are fully functional.

They can also put different copies of the same gene to different uses. All animals have two copies of their various genes, but without sex to mingle them, those of rotifers can become decoupled. They become free to evolve in new directions and acquire new roles. These animals get two genes for the price of one.

Through these adaptations, the bdelloids have avoided the seemingly inevitable extinction that awaits so many asexual animals. Sex is almost universal among complex life. Less than 1% of animal species reproduce solely through cloning and almost all of them evolved quite recently. Asexuality is a strategy found on the thinnest twigs of the tree of life, suggesting that most eventually die out. Bdelloids are exceptions. As Nick Lane describes in his wonderful book Life Ascending, they "have become biological celebrities, chaste exceptions in a world obsessed with sex, passing like monks through a red light district."