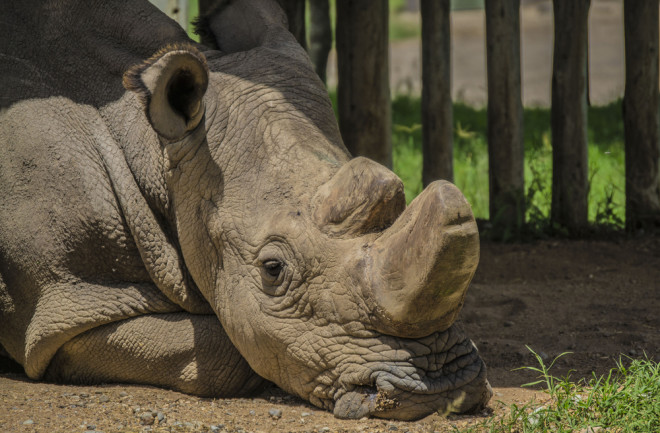 Sudan, the last male Northern White Rhino, died in March 2018. (Credit: Steve Turn/Shutterstock) The Northern White Rhino is basically extinct — just two living females remain — yet scientists announced Wednesday that they’ve found a way to bring the species back from the brink. In a paper published July 4 in the journal Nature Communications, an international team of researchers say they’ve created a first-ever hybrid rhino embryo outside the womb. The scientists extracted a kind of egg cells called oocytes from the closely-related female Southern White Rhinos. Then they put them in test tubes and fertilized the eggs using frozen sperm collected from now-dead Northern White Rhino males. The last male of their kind, named Sudan, died back in March. These embryos could become healthy young white rhino calves once implanted into females. “These are the first in vitro produced rhinoceros embryos ever. They have a very high chance to establish a pregnancy once implanted into a surrogate mother,” Thomas Hildebrandt, of the Leibniz Institute for Zoo and Wildlife Research in Berlin, said in a media announcement. Now that they’ve shown the method works, the team plans to collect oocytes from the last two Northern White Rhinos on Earth, fertilize them, and put the embryos in Southern White Rhino mothers. The technique was actually adopted from methods already used routinely for cattle and horses. It involves a 6-foot-long high-tech ultrasound machine with a special needle that punctures through intestinal walls to extract the oocytes. However, with sperm available from just four male Northern White Rhinos, the scientists say this method alone won’t be enough to restart a genetically diverse, self-sustaining population. But they’ve already got a plan for developing that diversity. Thanks to existing stem cell technology, they should be able to create what scientists call gametes. These are mature sexual reproduction cells, like a sperm or egg, that join to create a zygote, or fertilized egg cell. So, the researchers would create germ cells using stem cells from now dead Northern White Rhinos, then they’d turn those into new eggs and sperm, increasing the genetic diversity beyond those few existing individuals. There were 2,000 Northern White Rhinos half a century ago. But the species has since been eradicated due to habitat loss, poaching and civil war.