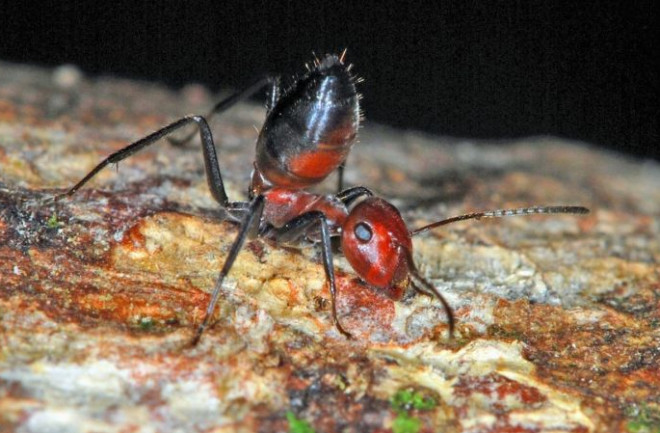 Step back, or I'll explode! (Alexey Kopchinskiy/Pensoft Publishers) Ants, social insects that live in structured communities and work around the clock to keep the colony running, really take one for the team. Elderly and terminally ill ants leave their nests to die, while others purposefully explode. Scientists recently discovered a new species of exploding ants, which kill themselves to save their colony as a defensive behavior. Worker ants can choose to rupture their abdominal wall to ward off or kill enemies. During the fatal act, called autothysis, the reddish-brown ants secrete bright yellow sticky toxins from their mandibular gland. “Imagine a single ant is like a cell in a human body,” Alice Laciny, the article’s lead author told the Washington Post. “The exploding workers work as immune cells. They sacrifice their lives to hold off danger.” Unfortunately, the explosion isn't anything like what you'd see in a movie — no big, gory scene or loud bang. Instead, the ants just bite their enemy while contracting their muscles hard enough that their skin pops. This species, found in Southeast Asia, comes from the group Colobopsis cylindrical, known for its suicidal tendencies. Scientists first described these kamikaze ants more than 100 years ago, with formal discoveries ending in 1935 due to a lack of evidence. But in 2014, a team comprised of researchers from Austria, Thailand and Brunei set out to further investigate these selfless ants. Their findings were published Thursday in the journal ZooKeys. Previously referred to as “yellow goo” (glad we’ve graduated from this), the species is now named Colobopsis explodens.  There are more than 10,000 known ant species inhabiting places around the world, with at least 15 known exploding ant species. But ants aren’t the only animal known to sacrifice themselves for the greater good. Older worker termites are also noted to explode, launching chemical assaults on invaders.