Researchers Crack the Case of Why Flies Are Hard to Swat 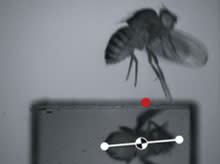 In a match-up between an annoyed human brandishing a fly swatter and a buzzing fly, who wins? As most people know from frustrating experience, all too often the fly easily evades the human's swat, and buzzes merrily into another region of the room. Now, using a high-speed camera, scientists have determined just how the fly makes its astoundingly effective escape. Biologist Michael Dickinson used a video camera that shoots 5400 frames per second to record a fly's precise motions when threatened with a swatting. The video showed that as a threatening object moved towards the fly from one direction, it shuffled its feat and positioned itself to take off in the opposite direction--all within 200 milliseconds.

"They perform an elegant little ballet with their legs," says Dickinson. "They move their legs around to reposition their bodies so that when they do jump, they will push themselves away from the looming threat" [NPR].

The study, published in the journal

[subscription required], illustrated a precise series of actions, in which the insects

shuffled their feet and shifted their weight so that their center of mass was just above their two middle legs, which they use to jump [ScienceNOW Daily News].

All those actions took place a full 100 milliseconds before the flies beat their wings to escape, researchers say. While the sheer speed of the process is remarkable, researcher are most impressed with what it indicates about the fly's poppy seed-sized brain: that flies have not only lightening-fast visual processing, but can use the information they gather to plan an appropriate escape. How, then, can we defeat these fiendishly clever winged adversaries?

The right approach is to aim not at the insects themselves because they are extraordinarily good at anticipating where exactly your blow will land. “It is best to aim a bit forward of the fly's starting position, to anticipate where it is going to jump when it first sees your swatter,” said Michael Dickinson [The Times].