Replaying evolution reveals the benefits of being slow and steady

Video game players are used to replaying history. They can load up any saved game and start afresh, sometimes making different choices that lead to alternative endings. Life, sadly, is no game and it’s far more difficult to reload and start again... difficult, but not impossible. In a laboratory in Michigan State University, Richard Lenski repeatedly replays evolution from saved files. Lenski’s aptly named “long-term evolution experiment” is the longest-running in history, and one of the most important. It looks deceptively simple – just twelve gently shaking flasks of sugary solution, each containing a strain of the gut bacterium Escherichia coli. Lenski bred the dozen strains from a common ancestor in 1998. Every day since then, his team has transferred one per cent of the cells into a fresh flask to grow anew. Last month, the bacteria passed their 50,000^th generation. Every 500 generations, the team takes a sample from each of the dozen strains and freezes them. These stocks are the experiment’s “fossil record” – its living save-files. By thawing them out and growing them afresh, the team can compare their fates to that of the original dozen. As the late Stephen Jay Gould once said, they can “replay life’s tape”. Using the bacteria, Robert Woods and Jeffrey Barrick (both now working in different labs) have shown that slow and steady can often win the evolutionary race. “Hare” bacteria, which initially take the lead and outperform their peers, might eventually lose out to strains with hidden potential - “tortoise” strains that were better at evolving. Woods and Barrick knew that by the 1500^th generation, many of the bacteria had genetic changes (mutations) in two important genes, which allowed them to outcompete their peers. These changes weren’t new – many of the microbes already had them by the 500^th generation. To understand how these “eventual winners” rose to power, Woods and Barrick cloned two strains of bacteria which had the right mutations from the 500^th generation stocks. They also cloned two “eventual losers” that lacked these important mutations. All of these strains were superior to the ancestral one – the 0^th generation bug that started the whole experiment. But to everyone’s surprise, the eventual losers were better adapted than the eventual winners. When pitted against each other, the so-called losers came out on top. In direct battle, with no further changes, the “winners” would have been driven to extinction within another 350 generations. How did they survive, let alone triumph? Did they just get lucky? To find out, Woods and Barrick replayed the experiment... repeatedly. They made ten clones of each of their four chosen strains at the 500 generation mark, and grew them for almost 900 more. You can see the results in the colourful graphs below (see footnote). The vertical axis in either direction is a measure of evolution – it represents how much the strains had changed from the originals. The eventual winners (right) started changing about a hundred generations earlier than the eventual losers (left) and they did so more quickly and more dramatically. 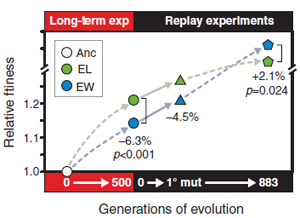 By 800 generations, the winners had more than made up for the losers’ headstart. When pitted against each other, on average, they were the superior strains. What gave the winners their eventual edge? They weren’t evolving any faster, for they ended up with the same number of extra mutations as the losers. Instead, Woods and Barrack found that the eventual winners started off with the right backgrounds. The winners eventually gained a mutation in a gene called spoT, while none of the losers did. The gene affects the way in which DNA is packaged. Mutations that alter spoT can set off sweeping changes across the entire genome, radically changing which genes are switched on or off. And this particular mutation turned out to be very beneficial to the bacteria that picked it up. The losers, unfortunately, never did. They had a mutation in a different gene called topA (which also controls the packaging of DNA) that cancelled out the benefits of the spoT one. Their version of topA prevented them from ever picking up the valuable spoT mutation – after all, what would be the point? The winners had no such problems – the critical spoT mutation could live in perfect harmony with their version of topA. So the eventual winners were able to pick up, and benefit from, a new genetic innovation that the eventual losers weren’t in a position to appreciate. As Woods and Barrack write, the losers “shut the door on at least one important avenue for further improvement.” While they snoozed in their comfortable lead, their tortoise peers overtook them. Reference: Woods, Barrick, Cooper, Shrestha, Kauth & Lenski. 2011. Second-Order Selection for Evolvability in a Large Escherichia coli Population. Science http://dx.doi.org/10.1126/science.1198914

More on the long-term evolution experiment: History restricts and guides the evolution of innovations

Woods and Barrick used a really elegant method to monitor the evolution of their forty cloned strains. In each culture, they mixed two versions of the same strain in equal proportions – one that could eat a sugar called arabinose and one that couldn’t. Aside from this difference, the two versions were genetically identical. There wasn’t any arabinose in their surroundings, so this ability didn’t matter to the bacteria. It did however matter to Woods and Barrack – it gave them an easy way to track the evolution of their strains. Over time, new mutations turned up that gave specific cells an advantage and soon edged out their weaker siblings. If these mutations turned up in arabinose-eating cells, then the population as a whole became better at consuming the sugar; otherwise, they became worse. The change in arabinose-eating ability – in either direction – showed how far the bacteria had changed from their original forms.