Renovating a runt - the extreme evolution of the Y chromosome 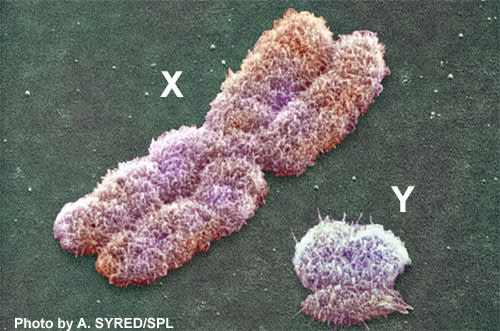 Men who think that size really matters should probably not think too hard about the Y chromosome. This bundle of genes is the ultimate determinant of manliness, and it happens to be a degenerate runt. Over a few hundred million years, it has shrunk considerably, jettisoning around 97% of its original genes. Where it was once a large library of genes, now it's more a struggling independent bookstore. This loss of information defined the youth of the Y chromosome but nowadays, things are different. Renovation is the order of the day.

Jennifer Hughes from MIT revealed the recent history of the Y chromosome by comparing the human and chimp versions. They are incredibly different. They have rapidly evolved since the two species last shared a common ancestor 6 million years ago. In this relatively short span of time, the two Ys have accumulated differences that other chromosomes would take 310 million years to build up. It's the sort of genetic disparity you'd expect to see between humans and chickens, not between us and our closest relatives!

This drastic remodelling contradicts the current view of Y evolution, which suggests that the chromosome has stagnated. It has lost so many of its genes that some scientists thought it might waste away altogether within another 10 million years. But rumours of its impending demise had been greatly exaggerated. In 2005, Hughes showed that Y isn't shrinking at the breakneck pace of old.

That result was based on a comparison of individual genes on the two chromosomes. Since then, Hughes has managed to fully sequence the chimp Y, the first time this has been accomplished for a non-human animal. Considering how small the chromosome is, sequencing it is remarkably tricky. It has lots of long, repetitive sequences that are subtly different and hard to tell apart through conventional means.

Nonetheless, Hughes managed it. By comparing the two sequences, she found that the Y chromosome is an island of difference in a sea of resemblance. The chimp and human genomes are famous for their similarity; they're a 98.8% match for each other. And indeed, where the chimp and human Y sequences align, they are a 98% match, just like the rest of the genome. But they don't align very well. Around 30% of the chimp Y chromosome has no human counterpart and vice versa.

This flies in the face of the idea that the Y chromosome is evolutionarily stagnant. Since our ancestors split from those of chimps, our Y chromosomes have become hotbeds of genetic change. They have gained and lost sequences with wanton abandon, to a much greater extent than the rest of the genome. Even the sequences that have remained have been grossly rearranged. If you looked at chromosome 21 from both species (which has also been thoroughly sequenced), you'd think you were looking at a pair of identical twins. If you looked at the two Y chromosomes, you'd think you were looking at distant and barely related cousins.

Despite these renovations, the human Y chromosome hasn't actually lost any of the genes that its ancestor had 6 million years ago (although it has picked up a few). The chimp Y chromosome, on the other hand, has lost or disabled many of its genes, so it has a much smaller portfolio than ours does.

The DNA of the Y chromosome falls into two main groups. The first group - the "X-degenerate segments" -contain versions of genes found on the X chromosome. They reflect the shared evolutionary history of the two sex chromosomes, both having evolved from a single ancestor that had nothing to do with determining sex.

The second group - the "ampliconic segments" - are more interesting and not just because they make Y so hard to sequence. These large, repetitive chunks of DNA contain many copies of genes that are activated in the testes. They have been the focus on much of the Y chromosome's recent remodelling. Half of the ampliconic sequences in the chimp Y have no human equivalent and vice versa.

What is it about the Y chromosome (and the chimp one, in particular) that makes it such an evolutionary hotbed? Hughes suggests three reasons. Firstly, its genes are incredibly important for making sperm and sperm is incredibly important for chimpanzees. Many males mate with the same female and it's the quality of their sperm that decides whether they actually father the next generation. This fierce competition is why a chimp's testicles are three times larger than a human's relative to its body size. It also means there's a lot of evolutionary pressure acting on the genes that produce the sperm.

Secondly, most chromosomes come in pairs. When they're duplicated, they temporarily fuse and cross over, providing an opportunity to exchange and shuffle their genes. But the Y chromosome is one-of-a-kind; it has nothing to cross over with. This makes any beneficial mutation on a Y gene all the more impactful. As this mutation spreads throughout the population, it drags nearby sequences along with it as genetic hitchhikers. In this way, a single mutation could change the evolutionary fate of the entire chromosome.

Finally, as I've mentioned, the Y chromosome is riddled with repetitive sequences. To understand their impact, imagine you had to copy out a long string of numbers. If groups of digits were repeated again and again, at some point you would probably copy a bit you'd already done, or mistakenly skip ahead and miss out an entire group of numbers. The same things happen when your cells duplicate chromosomes with lots of repetitive DNA. Some bits go missing, some are duplicated, and some are flipped around. In DNA, repetition drives change.