Reign of termite queens rests on a single gene

The success of termites ­and other social insects hinges on their complex social systems, where workers sacrifice the ability to raise their own young in order to serve the colony and its queen - the only individual who reproduces. But this social order can be thrown into chaos by knocking out a single gene, and one that originally had a role in that other characteristic termite ability - eating wood. 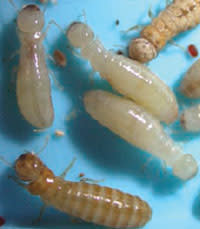 Judith Korb from the University of Osnabrueck in Germany found that the queen termite relies on a gene called Neofem2 to rule over her subjects. Korb worked with the termite Cryptotermes secundus, and searched for genes that were strongly activated in quens but not kings or workers. Her search singled out Neofem2 and she used a technique called RNA interference (RNAi) to deactivate the gene in the queens of eight colonies.

Cryptotermes workers all have the ability to become royalty, but only if the current monarchs die. Until then, they keep their reproductive rights at bay. If queens are physically removed, the remaining workers start a war of succession, headbutting each other to try and establish their dominance. Those that butt most frequently ascend to the head job. And that's exactly the behaviour that Korb saw when she nullified Neofem2.

The queen herself was unaffected, but her subjects became unruly. The frequency of butting bouts tripled in the day after the gene was silenced, something that didn't happen in 24 control colonies where the queen's genes were left unaltered. Cutting out this single gene made the workers behave as though their colony was queenless.

Obviously, the real test would be to see if one of the workers then transforms into a queen, but that takes several days and the effects of RNAi only last for a couple. Instead, Korb had to rely on aggression as a proxy for worker revolt.

Neofem2 produces a beta-glycosidase protein, which belongs to a larger family called glycosyl hydrolases. This affiliation provides a strong clue as to how the social intricacies of termite life evolved at a molecular level.

Glycosyl hydrolases are found in all kingdoms of life and they help to sunder the bonds in large carbohydrate molecules, converting them into simple sugars. It's this ability that allows termites to digest cellulose and other large plant molecules and in fact, the gene's closest equivalent is used by another termite species, Neotermes koshuensis, to digest wood.

As a result of their digestive role, beta-glycosidases can also release airborne chemicals. Korb suggests that Neofem2 might play a role in producing the pheromones that allow termites to communicate with one another and that allow the queen to suppress her workers' sexual activities.

Testing that hypothesis will have to wait - for now, this study tells us that the social lives of animal can make big evolutionary steps through relatively minor changes in biochemistry. The complex social systems of termites may have evolved by co-opting genes that originally allowed them to digest wood.

More on termites and social insects: