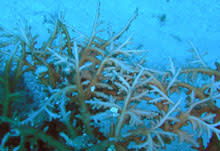 Several rare varieties of staghorn coral have begun mating across species lines and are creating surprisingly robust hybrids, according to a new study; researchers believe the unusual step is an effort to adapt to changing ocean conditions and avoid extinction. The findings are an unexpected piece of promising news about coral reefs, which usually make the headlines for their potential fate as one of the first victims of global warming. Coral reefs around the world are under pressure from pollution and gradually warming oceans, and researchers have worried that rare species are particularly vulnerable to extinction. But in the case of these staghorns, the new study shows that when faced

with a shortage of mates of their own kind, these rare corals have cast a wider net and started cross-breeding with other coral species, producing hybrids. "It pushes the boundaries of our traditional understanding of species," said a researcher, Zoe Richards. "They are being a little promiscuous" [Sydney Morning-Herald].

For the study, recently published in the journal PLoS ONE, marine biologists examined the genetics of three rare Caribbean corals. They found a higher level of genetic diversity within each species than expected, indicating that the corals have been cross-breeding. Some of the hybrids

were even found in marginal habitats such as very deep or extremely shallow water, suggesting the coral were developing new traits allowing them to push into new environments.... "This is good news, to the extent that it suggests that corals may have evolved genetic strategies for survival in unusual niches and may prove tougher to exterminate than many people feared," Dr Richards said [Australian Associated Press].

Researchers don't yet know how this adaptation came about, and will continue to study the hybrids in an attempt to solve the puzzle. But some commentators had more philosophical questions, to which there are no easy answers.

If a species' genes exist, but no pure specimens are alive, has it really saved itself from extinction? Hasn't it really disappeared, and been absorbed into something else? And is this a natural step, or are human activities -- which threaten coral worldwide -- forcing this to happen? [Plenty]

Related Content: 80beats: Are Wolves Interbreeding Themselves to Extinction? 80beats: In a More Acidic Ocean, Coral Reef “Skeletons” May Crumble 80beats: Coral Reefs Could Die Off Within the CenturyImage: ARC Centre of Excellence for Coral Reef Studies