Rampaging Caterpillars Are Eating Their Way Through Liberia 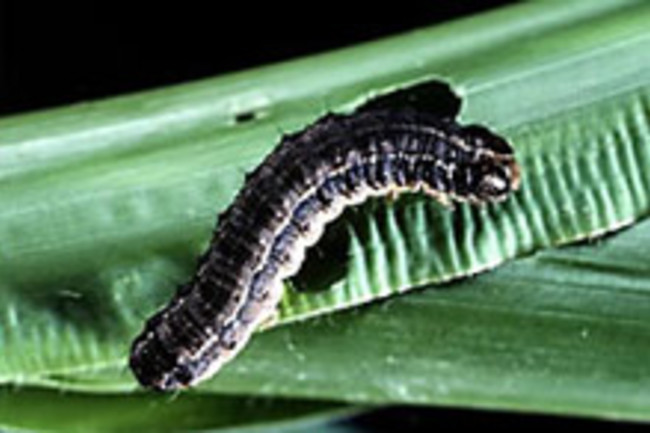 In Liberia, a caterpillar infestation has turned into a national emergency. They began advancing out of the forests several weeks ago.

From off in the bush, townspeople at the epicenter of the plague heard a low roar, like the sound of heavy rain cascading down through the leaves. It was caterpillar droppings. In early January, when the long, black caterpillars reached the creeks that serve as the main water sources for the town of Belefanai in north-central Liberia, the creatures' feces instantly turned streams dark and undrinkable [National Geographic News].

Since then, things have only gotten worse. The caterpillars are eating their way through coffee and cocoa fields, and thousands of people have fled their homes. The caterpillars are native to West Africa but have never been reported as a widespread pest in Liberia. Researchers say the cause of this population explosion is still mysterious; Liberian agriculture official Winfred Hammond says his best bet is that the boom was related to last year's strange climate.

The caterpillars live in the forest, and their population is usually kept down by wasps that lay eggs on the moth’s cocoon and eat the caterpillars, Mr. Hammond said. But the rains last year were unusual. Downpours as late as Christmas may have interrupted the reproduction cycle of the wasps that prey on the caterpillars [The New York Times].

Now that several weeks have passed, the caterpillars that originally emerged from the forests have retreated into cocoons, or have already hatched as moths. That has regional officials seriously worried that the infestation will spread.

The insects can travel up to 60 miles (100 km) a day, and have already crossed the border to Guinea, an agriculturally rich country and the source of many of Liberia's food imports. That has set alarm bells ringing in neighbouring Ivory Coast, the world's top cocoa grower and an important producer of coffee, rubber, palm oil and other cash crops [Reuters].

The only piece of good news came when scientists realized that they'd originally misidentified the pests. At first, entomologists believed the caterpillars were army worms, which often plague East African farmers and are notoriously difficult to eradicate. Army worms burrow into the soil for their pupal stage before they emerge as moths, which makes it hard to kill them all with pesticides. But a closer examination showed the caterpillars to be a different species, Achaea catocaloides, which researchers say will be easier to attack chemically.

They spin their cocoons on the ground under fallen leaves, which leaves them relatively exposed [BBC News].