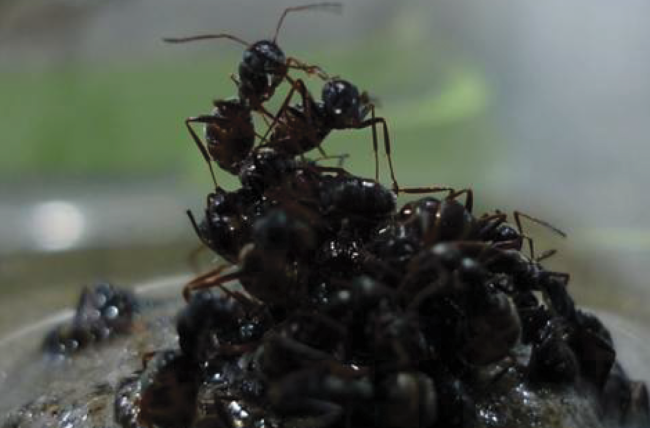 Sometimes at the climax of a Star Trek episode, the captain would yell out "Battle stations!" and send the crew scurrying frantically through the corridors. It wasn't really clear what those battle stations were. Presumably, crew members headed to posts they'd been previously assigned, and this let the whole ship react to the crisis efficiently. Certain ants respond to a crisis by binding their bodies together into floating rafts. And like the Star Trek crew, they seem to have designated posts. Formica selysi ants live in central and southern Europe. Their preferred homes are along rivers, so the ants need to be prepared for floods—and they are. When water rises around them, the ants cling together to make a raft. They load the queen at the raft's center. Baby ants, being especially buoyant, become flotation devices: the other ants pack the larvae and pupae at the bottom of the raft. (Don't worry. Somehow, this doesn't kill them.) The same researchers who'd discovered the babies-as-pontoons trick wanted to find out whether there were other specialized roles within the raft. Led by graduate student Amaury Avril of the University of Lausanne in Switzerland, they collected ants from 25 colonies living along the Rhône River. In the lab, the researchers used brightly colored paint to give unique markings to some of the ants. Then they put ant groups into clear plastic boxes and slowly flooded them. As the ants realized what was happening and formed their rafts, cameras captured the positions they took. Each group experienced two floods, three days apart. Tracking the color-coded ants, the scientists saw that an ant's place in the first raft predicted its place in the next one. They classified each ant's position as the top, base, middle, or side of the raft. An ant that clung to the top of the heap one day was more likely to be found on the top during the next flood. The same was true for an ant near the base of the raft, or in the middle, or holding on to the side. The researchers also tried the experiment with baby ants mixed in. Once again, they saw the larvae and pupae get loaded on the bottom of the raft. This made for wider, more flattened rafts, since it takes a lot of worker ants to hold together the layer of babies. In the second flood, the rafts took on a similar shape—even if no babies were present this time. When floodwaters rise, then, the ants seem to stick to what they know. They're likely to go back to the position they held in a recent raft. That's true even if the circumstances are different this time—say, there are no baby ants around. The researchers don't know what rules determine an ant's place in the raft. But they think it's possible that ants' roles are based on their age, size, or status within the colony. Formica selysi isn't the only species that doubles as a construction kit. South American fire ants can form large, floating rafts and balls. Army ants in Panama build bridges out of their bodies to cross gaps in their path. Their methods may be somewhat mysterious, but in a red-alert situation, these are the crew members you'd want on your side. https://www.youtube.com/watch?v=BDWMWLqm4zI