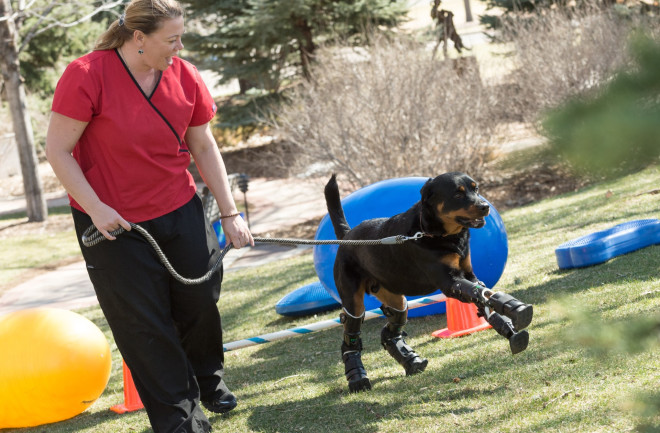 Brutus takes a stride with his custom-fitted prosthetic limbs. (Credit: Colorado State University/John Eisele) For a 2-year-old Rottweiler named Brutus, having no paws is no problem. Although just a young pup, Brutus has already lived a tough life: A neglectful owner left him outside in frigid temperatures so long that all four of his paws needed to be amputated due to severe frostbite. However, thanks to a crowdfunding effort, Brutus was fitted with four prosthetic limbs. He’s just the second dog known to get around on four artificial limbs.

Brutus can walk again thanks to OrthoPets, a Denver-based animal prosthetics developer, and experts at Colorado State University’s James L. Voss Veterinary Teaching Hospital. Brutus’s artificial limbs needed to serve three purposes: to protect his limbs, support his front legs and realign his legs to an identical length. Laura Aquilina, Brutus’s current owner, raised $12,500 for his therapy and prosthetics through the fundraising website GoFundMe. He was equipped with the devices last year, after which he underwent six months of rehabilitation to learn how to use his new limbs. He still regularly attends physical therapy.

A Long Road to Recovery

Before receiving his limbs, Brutus had trouble walking on hardwood floors and getting up stairs. He was essentially limited to carpeted rooms, and Aquilina was having trouble meeting his needs. Now, he’s well on his way to getting back to the playful business of being a dog. “We’re working with Brutus to help him adjust to wearing his new prosthetics,” says Sasha Foster, CSU’s certified canine rehabilitation therapist. “He’s learning how to move with them on. Once he’s mastered that, we will help him achieve higher-level functioning activities, like hiking and playing with other dogs.”

The limbs are great, but even Brutus needs a break from time to time. (Credit: Colorado State University/ John Eisele) Over the next few months, Brutus’s therapy regimen will include underwater treadmill therapy, balance activities and work with exercise balls. Even if he passes with flying colors, he’ll probably need occasional physical therapy the rest of his life. But thanks to generous donors and, of course, science, Brutus has a whole new lease on life.