Pulanesaura: The One That Put Four on the Floor

Sauropod's anatomy reflects the transition from two legs to four. 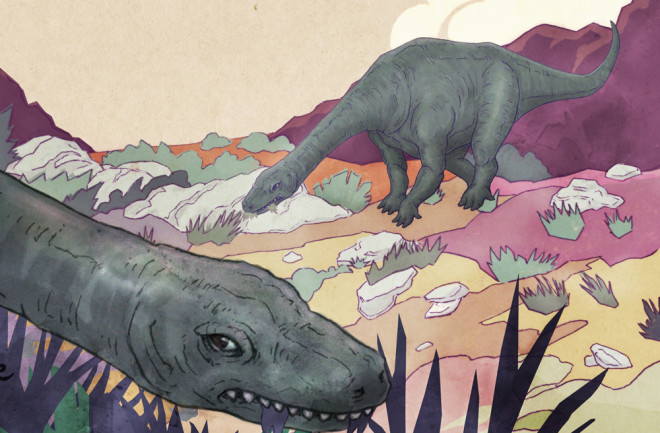 Their predecessors were small and walked on two legs. South Africa’s Pulanesaura eocollum, which lived about 190 million years ago during the Early Jurassic, gives us a peek at that transition: One of the earliest sauropods, it’s the first with anatomy that shows it walked on all four legs. At about 26 feet long, Pulanesaura was petite compared with later sauropods and had a relatively short neck, but one with greater flexibility than its bipedal ancestors.

Its neck physiology, which has hallmarks of later, larger kin, indicates that it was a low browser, sweeping its head back and forth, unlike its close relatives — living at about the same time and in the same general location — which stood on their back legs and gathered food with their forelimbs. Pulanesaura, says paleontologist Blair McPhee, lead author of the August study describing the dinosaur, suggests sauropods evolved to exploit untapped food sources. “The story,” says McPhee, “is really the idea of dividing resources.”