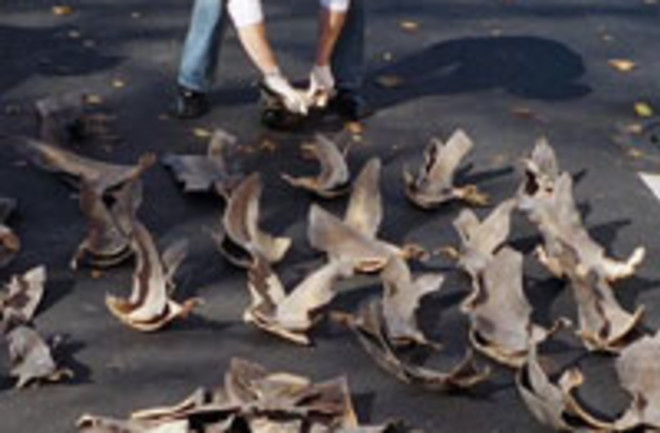 In a victory for East Asian nations that consume sharkfin soup, the Convention on International Trade in Endangered Species (CITES) has shot down three of four proposals to protect sharks. Member nations of CITES who gathered in Doha, Qatar,

rejected proposals that would have required countries to strictly regulate — but not ban — trade in several species of scalloped hammerhead, oceanic whitetip and spiny dogfish sharks [The New York Times].

Japan also lobbied against the protections, because it strongly opposes extending the convention's protections to any marine species (including the bluefin tuna that is so beloved by Japan's sushi connoisseurs). The only proposal that managed to get through was a proposal from the European Union and the island nation of Palau to protect the porbeagle shark, which is prized for its meat. But even this victory is a shallow one, as the proposal passed by a margin of just one vote, and could be overturned at the conference's final session on Thursday. Marine biologists have long warned that hammerhead and whitefin sharks are being overfished, particularly by countries like China where sharkfin soup is a prestigious delicacy. Fishermen harvest the fins and typically throw the sharks back into the sea to die. The rate of species decline in some areas is an astounding 90 percent.

Japan led opposition to the four measures, arguing that management of shark populations should be left to regional fisheries groups, not CITES [Sydney Morning Herald]

. The current CITES meeting has been seen by some conservation experts as a dispiriting sign that the convention isn't making its decisions about endangered species based on scientific findings, but is instead bowing to politics and economic interests.

"It appears that science no longer matters," said Elizabeth Griffin of wildlife conservation group Oceana, based in Washington. "CITES is not fulfilling its obligation to protect species threatened by international trade" [Sydney Morning Herald].

Stuart Beck, Palau’s ambassador to the United Nations, neatly summed up the anger felt by conservationists after the shark protections failed, saying in a statement:

“I am sure that, properly prepared, bald eagle is delicious. But, as civilized people, we simply do not eat it” [The New York Times].