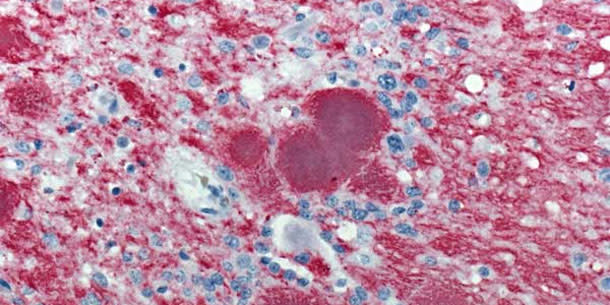 There’s something unfeasibly sinister about prions. These infectious entities are incredibly simple, but they can cause fatal and untreatable diseases like mad cow disease, CJD, and others. Prions are malformed versions of a protein called PrP. Like all other proteins, they’re made of chains of amino acids that fold into complex shapes. Prions fold incorrectly, and they encourage normal PrP to do so. These deformed proteins gather in large clumps that wreck brain tissue. Once this process begins, we have no way of stopping it. Prions are little more than bits of renegade origami, but they can bring down that most complex of biological structures – your brain. It gets worse. Before they spread to the brain, prions often multiply in the lymphatic system –the group of organs that includes the spleen, lymph nodes, appendix and tonsils. Vincent Béringue from the French National Institute for Agricultural Research has found that prions can hide in these tissues, turning individuals into silent carriers even if they never actually develop disease. Worse still, the spleen provides an easy entry-point for prions, allowing them to jump more easily from one species to another. We know that prions can sometimes jump the species barrier. That very risk inflamed the British panic of the 1990s,as people worried about catching CJD (Creutzfeld-Jakob disease) after eating BSE- contaminated meat. But such jumps are meant to be relatively rare. Different species have their own versions of the prion protein, and one animal’s malformed versions should have a harder time of converting another animal’s normal ones. Several teams have confirmed the existence of this barrier by exposing one species to the prions of another. They look for signs of brain diseases, and typically find few of them. But that’s a misleading test. We now know that prions can multiply in the brain without causing any outward signs of disease. They don’t always loudly destroy. Sometimes, they silently gather. Béringue’s study illustrates this well. He worked with mice that had been genetically engineered to stock the sheep version of the prion protein, rather than their own. He then exposed the mice to the prions that cause chronic wasting disease (CWD) in deer. None of the rodents developed any signs of disease. Only the two oldest mice – the ones who lived for longer than 500 days (17 months) – had signs of infection in their brains. But their spleens told a different story – they were almost all swimming with misshapen prions. If you looked at their brains, you’d conclude that there’s a 9 per cent chance of prions jumping from deer to sheep. If you looked at their spleens, those odds go up to 94 per cent. Béringue also worked with mice that stocked the human prion protein, and exposed them to the strain that causes BSE in cows. With this set-up, he could test how likely cow prions are to jump into humans, without actually using either species. The results matched those of the sheep-to-deer test. None of them showed signs of disease and only 10 per cent had infectious prions in their brains, but over 60 per cent had infected spleens. It seems that lymphatic tissue gives prions an easy pass into the body of another animal. Once there, they effectively go into stealth mode, hiding from clinicians who are only focusing on the brain, or who look for blatant signs of disease. Obviously, such infections aren’t a big deal to the individuals themselves if the prions aren’t causing them health problems. But the worry is that these people could act as silent carriers, and transmit their rogue proteins to others via surgeries, blood transfusions or donated organs. In the UK, there are already signs that the BSE prion, despite causing just a few hundred cases of CJD in humans, may be hiding out in much larger numbers of people. In 2004, David Hiller found that 3 out of 12,000 appendix samples were positive for prions, and a later survey found 4 hits in 14,000 samples. Based on these results, an advisory group to the UK’s Health Protection Agency estimated that around one in every 4,000 people in the UK could be silently harbouring prions. That works out to around 15,000 people. Reference: Béringue, Herzog, Jaumain, Reine, Sibille, Le Dur, Vilotte & Laude. 2011. Facilitated Cross-Species Transmission of Prions in Extraneural Tissue. Science http://dx.doi.org/10.1126/science.1215659More on prions and other infectious proteins: