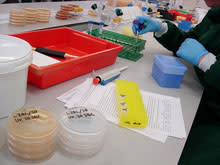 In its first official report, the Presidential Commission for the Study of Bioethical Issues recommended that the budding field of synthetic biology remain unregulated. In the report's (pdf) 18 recommendations, the commission does suggest that synthetic biologists should self-regulate their work and be required to take ethics training. It also recommends that the president's office better coordinate government agencies to oversee the work. But it stopped short of calling for a halt on research that creates organisms not found in nature.

“The commission thinks it imprudent either to declare a moratorium on synthetic biology until all risks can be determined and mitigated, or to simply ‘let science rip,’ regardless of the likely risks,” the report says. “The Commission instead proposes a middle ground — an ongoing system of prudent vigilance that carefully monitors, identifies and mitigates potential and realized harms over time.” [The New York Times]

by building a bacterial genome from scratch and implanting it into a new bacterial cell, where it "booted up" and took over. That made some people nervous about the possible implications of being able to create life from chemicals--critics worried that researchers might create harmful organisms that could escape from the lab, wreaking havoc on human health or the environment. But the commission suggested that such fears are unfounded.

“Here’s something significant in science, but there’s no cause for fear and dread about what is going to happen immediately next,” Amy Gutmann, the chairwoman of the commission, said in an interview Wednesday. [The New York Times]

80beats: Will Venter’s “Synthetic Cell” Patents Give Him a Research Monopoly?

Science Not Fiction: One Small Step for Synthetic Biology, One Large Step Into the Unknown