Prehistoric Stone Tools: Where's the Beef (Or At Least the Rhino)? 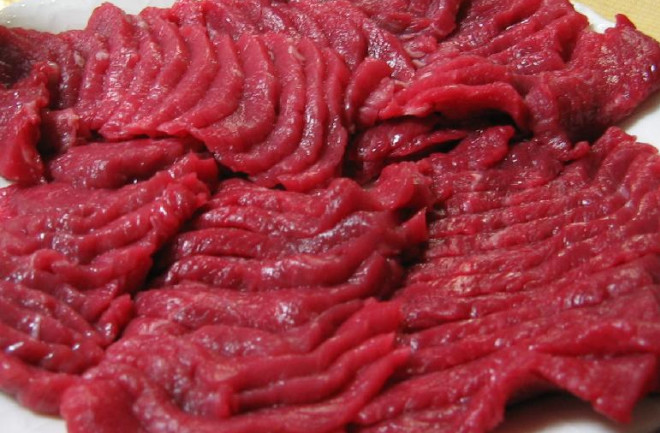 Horse meat is a delicacy in some cultures today — and apparently also hit the spot among hominins 250,000 years ago, though the tools back then didn't slice quite as nice. Credit: Wikimedia Commons You've heard of the Paleo diet (MEAT GOOOOOOOD) but what about the Pleisto diet? Specifically, what members of the genus Homo were noshing on some 250,000 years ago, during the Middle Pleistocene. For years we've assumed it was pretty much whatever they could get their hands on, but researchers can now narrow the definitive menu to horse, rhinoceros, duck, wild bovine and the occasional camel. While new research has nailed the array of Middle Pleistocene meat du Jour selections at a site in the Middle East, it raises an even bigger question: guess who came to dinner? Researchers analyzing stone tools at a site in Azraq, Jordan, found the oldest known evidence that hominins used hand axes, blades and flakes to butcher animals. On the one hand, it's long been assumed that food preparation was one of the uses for stone tools, which have been around in some form for at least 2.7 million years, predating genus Homo. I mean, if you're going to go through all the trouble of making a stone tool, which is not easy, you're not doing it just to tuck into a scabbard on your belt and impress folks, you know? (Particularly because neither scabbards nor belts had been invented yet.)

Red lines (upper right) mark the spot where this Middle Pleistocene stone blade tested positive for rhino residue, indicating it was part of an ancient butcher's tool kit. Image courtesy of April Nowell. On the other hand, confirming that stone tools were used for this purpose and documenting what kind of animals were butchered gives us greater insight into the diet and lifestyle of hominins back in the day. Consider, for example, that 250,000 years ago the area around Azraq was transitioning from wetland to a dry, open, steppe-like environment. It's a testament to the stone tool-users' skills in this harsh setting that they were able to bring home, if not the bacon, then at least both the duck and the rhino. The diversity of species hints at a mastery of a range of hunting techniques. And let's face it: that complexity of behavior is more advanced than that of we who hunt at Whole Foods.

The research team, which published its study in the Journal of Archaeological Science, collected roughly 10,000 stone tools from the Azraq site and gave more than half of them a good eyeballin' (note: not actual scientific term). They identified nearly 50 of the tools for additional testing based on promising wear patterns — more than a third of those implements tested positive for blood and other animal products. Delicious. Protein residue from five different animals was identified among the 17 tools that tested positive: rhinoceros, camel, duck, bovine and horse. The team also tested for goat, deer and cat residue but came up empty, so apparently neither Billy, Bambi nor Simba were on the menu.

Lead investigator April Nowell of the University of Victoria digs up the dirt on what was for dinner for hominins who occupied the Azraq site in Jordan. Credit: James Pokines. Okay, so maybe you're wondering who was doing all this slicing and dicing. That's the tantalizing question still to answer. The Middle Pleistocene, 126,000-781,000 years ago, is a sketchy time for the hominin family tree. We know that, by the time meat was on the menu at Azraq, the line that would evolve into us had already split from our last common ancestor with Neanderthals and Denisovans. We also know that, by 250,000 years ago, Neanderthals and Denisovans had split on their side of the family tree, and the former was already well-established in Europe. (In contrast to multiple Neanderthal sites in Europe, Denisovans are known from a tiny sample at a single site in Siberia.) The general location of the Azraq site doesn't help us understand what species was most likely to be serving up rhino steaks and duck tartare, either. The Middle East is, after all, a crossroads for known hominin hangouts: our own species is believed to have evolved in Africa and migrated through the area much later, though recent research is pushing back the departure date. With Neanderthals to the west, Denisovans to the east and the evolving Homo sapiens south of the Azraq site, it could have been any of these closely related species — or perhaps a Homo kin yet to be discovered — who came to dinner.