When dinosaurs ruled the land, other groups of prehistoric reptiles dominated the waters. Their bones have also fossilised and they reveal much about how these ‘sea dragons’ lived. They tell us about the shape of their bodies, the things they ate and even how they determined their sex. And according to Aurélien Bernard from the University of Lyon, they can tell us whether these reptiles could control their body temperature. The majority of reptiles are ‘cold-blooded’. Unlike mammals and birds, they can’t generate and retain their own heat, and their body temperature depends on their surroundings. But Bernard thinks that at three groups of marine reptiles – the dolphin-shaped ichthyosaurs, the crocodile-shaped mosasaurs, and the the paddle-flippered plesiosaurs – bucked this trend. Whether in tropical or cold waters, they could maintain a constant body temperature that reached as high as 35-39 degrees Celsius. Bernard estimated the body temperature of these ocean-going predators by studying their teeth. He took samples from 40 plesiosaurs, ichthyosaurs and mosasaurs as well as several prehistoric fish. The specimens came from five continents, and a range of periods from the Triassic to the Cretaceous. In every tooth, he measured the amount of different oxygen isotopes, a value that depends on the animal’s body temperature and the composition of the water it swallows. The data from the fish helped to calibrate the reptile data. By and large, fish body temperatures reflect the temperatures of the surrounding seawater. If the reptiles’ teeth had the same composition of oxygen isotopes as those of the fish, their bodies were also similarly as warm as their surroundings and they were probably cold-blooded. Any differences reflect a different means of regulating body heat. 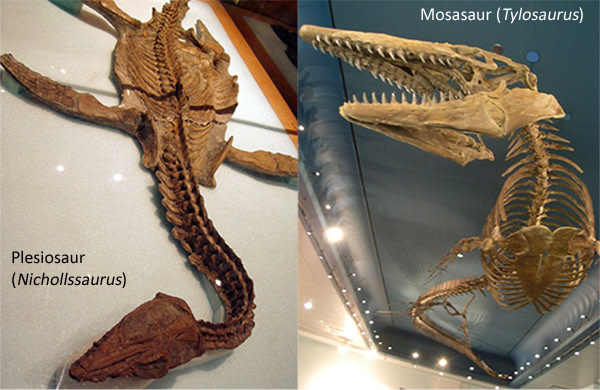 Using a mathematical model, Bernard calculated that both ichthyosaurs and plesiosaurs managed to keep a constant balmy body temperature from around 24-35°C, even when swimming through waters as cold as 12°C. The abilities of mosasaurs were less clear, but it seems that they had at least some control over their body temperature. These results fit with the portraits of ichthyosaurs and plesiosaurs as active, fast-swimming hunters, which needed warm bodies for their fast chases and deep dives. Likewise, the ambiguity around the body temperature of mosasaurs is consistent with the idea that they were ambush predators, whose sit-and-wait strategies wouldn’t have demanded such high metabolisms. Other lines of evidence support Bernard’s conclusion. In an earlier study, Ryosuke Motani from the Royal Ontario Museum suggested that the ichthyosaur Stenopterygius had a cruising speed and metabolic rate similar to today’s tuna. Other scientists noted that ichthyosaurs grew incredibly quickly after birth, another sign of a high metabolic rate. And finally, fossils that probably came from plesiosaurs and ichthyosaurs have been recovered from southeastern Australia, a region that would have been bitterly cold when these animals were swimming about. However, it’s still unclear how these giant reptiles managed their body heat. Today, the giant leatherback turtle is sort of warm-blooded – its massive size allows it to retain heat more effectively than its smaller cousins, an ability known as gigantothermy. If leatherbacks can pull of this trick, it’s entirely likely that even bigger animals like the mosasaur Tylosaurus did something similar. Modern fish, including some of the ocean’s top predators, use different tricks to warm their blood. Swordfish can temporarily raise the temperature of their brains and eyes, which gives it an edge when hunting fast-moving prey. Tuna go one step further. Like all fish, its hard-working muscles heat up the blood that flows through them. In other fish, that heat would be lost as the blood returns to the gills for a fresh load of oxygen. But the tuna’s blood vessels are arranged so that the warm blood flowing from the muscles travels past, and heats up, cold blood coming in from the gills. This set-up keeps the heat generated by the tuna’s muscles inside its own body. Some sharks rely on a similar heat exchanger; perhaps plesiosaurs and ichthyosaurs did the same. Reference: Science http://dx.doi.org/10.1126/science.1187443Photos by Captmondo, Sebastian Bergmann and PiotrusMore on prehistoric marine reptiles: How prehistoric sea monsters sorted males from females