Portable brain activity-recorder shows that sloths aren't all that sleepy

Three-toed sloths have a reputation for being some of the sleepiest of all animals, largely due to a single study, which found that captive sloths snooze for 16 hours a day. That certainly seems like a sweet deal to me, but it seems that the sloth's somnolent reputation has been exaggerated.

A new study - the first ever to record brain activity in a wild sleeping animal - reveals that wild sloths are far less lethargic than their captive cousins. In their natural habitat, three-toed sloths sleep for only 9.6 hours a day, not much more than an average first-year university student.

For something so routine, the function and evolutionary origins of sleep are still fairly enigmatic. One approach to solving these mysteries is to compare the times that different species spend asleep and relate these to their lifestyles, environments and bodies. What is it, for example, about an elephant that allows it to cope with 3.5 hours of sleep, while a mouse needs 14?

In mammals, these studies have already made some progress by measuring the electrical activity produced in the brains of different species as they lapse into sleep, using a technique known as electroencephalography or EEG. But according to Niels Rattenborg from the Max Planck Institute for Ornithology, these early studies all carry a major flaw - they only measured sleep patterns in captive animals. 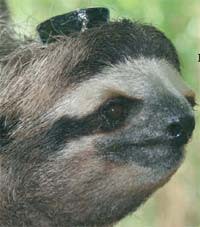 There are good reasons for that. Without EEGs, it is incredibly difficult to reliably tell the difference between wakefulness and the two different types of sleep - REM (rapid eye movement) sleep and non-REM sleep. And to record EEGs in wild animals, scientists traditionally needed to capture and anaesthetise them, implant electrodes and wait for them to recover. Such a lengthy procedure would have stultified the very natural conditions that field experiments are after.

Fortunately, these complicated surgical techniques may be a thing of the past. Rattenborg managed to study sleepy sloths by fitting them with a small, lightweight cap that was loaded with brain activity sensors. Sloths make a good first candidate for such an experiment, as they are easy to capture and their slow lifestyles are unlikely to dislodge the recorders.

Not so slothful after all...

Rattenborg captured three female brown-throated three-toed sloths in the Panamanian rainforest and fitted them with the recording cap, a radio-telemetry collar to reveal their locations and an accelerometer to record their movements. After several days of monitoring, the recorders revealed that the sloths slumbered for only 9.6 hours every day, more than 6 hours less than the data from captive animals would have us believe. REM sleep made up about 20% of total sleep, a very similar proportion to humans. 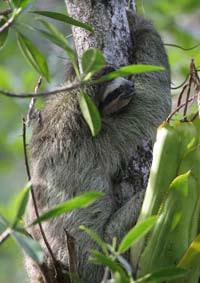 The reasons for this discrepancy aren't clear. Rattenborg analysed the activity of three adults, while the study using captive sloths included several juveniles. Young mammals tend to doze for longer than adults so the inclusion of youngsters could have skewed the average extent of sleep upwards.

Another equally plausible explanation is that the captive sloths were more relaxed in the absence of threats from predators and the ever-present supplies of food. In comparison, the wild animals may get the least possible amount of sleep in order to spend time foraging or being vigilant.

If anything, other species may be subject to even greater ecological pressures than the languid and well camouflaged sloths, and the difference in sleep durations between captive and wild individuals may be even greater. Rattenborg claims that we need more EEG measurements of animals sleeping in the wild to better understand how sleep varies between species. Thankfully, his sleeping-capped sloths show that we now have the technology to conduct such studies.