Pocket Science – T.rex the nose-loving tyrant leech king, why losers ejaculate more, and how cuttlefish could “see” with their skin

Not Exactly Pocket Science is a set of shorter write-ups on new stories with, where possible, links to more detailed takes elsewhere. It is meant to complement the usual fare of detailed pieces that are typical for this blog.

Tyrant leech king – a new T.rex found in the nose of a Peruvian girl

Three years ago, a nine-year-old girl was admitted to La Merced hospital in Peru with a headache that had lasted for two weeks and a strange “sliding sensation” in her nose. Her parents quickly discovered the source of the problem – a sizeable black worm lodged up her right nostril. They quickly sought medical help and it came in the form of Dr Renzo Arauco-Brown, who “with some effort” removed a seven-centimetre leech from the girl’s nose. Brown sent the animal to leech guru Mark Siddall from the American Museum of Natural History, who immediately recognised it as a new species. Uniquely among leeches, the bloodsucker had a single jaw (most have three) but it was lined with eight enormous sharp teeth. For this reason, the Siddall gave it the fanciful name of Tyrannobdella rex, or “tyrant leech king”. A new T.rex had arrived. It turns out that T.rex has a history of feeding on humans. After describing the new species, Siddall found two other specimens. Both had been removed from the nostrils of young boys in 1997. Like the most recent case, these children had also been bathing in local lakes and streams, which is almost certainly how they picked up their tyrant vampire. While most leeches are found on the skin, Tyrannobdella is a member of the praobdellid group, which have a disturbing propensity for entering human orifices. They have specialised at feeding on mucous membranes, such as those found in the nose, eye, vagina, anus and urethra (don’t click on these links if you’re squeamish). These bloodsuckers can stay inside for days or weeks on end. They lead to a condition called “orificial hirudiniasis” and they could be potentially life-threatening, especially if secondary infections kick in. It’s likely that many more members of this group are awaiting discovery, although finding them may be a tricky business. As Siddall slyly writes, “Our standard methods of attracting leeches to our exposed selves may prove awkward given their established propensity for particular anatomical feeding sites.” 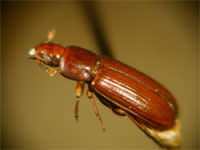 Not every male is a fighter and, as a result, many don’t become lovers either. But for these losers, there’s another option for passing on their genes to the next generation – make sure that you ejaculate copiously when you get the chance. The male flour beetle has to battle other males over the right to mate with a female. Kensuke Okada from Okayama University found that males who lose these fights become less aggressive and avoid fighting again. However, they make up for avoiding combat by doubling the amount of sperm they produce when they ejaculate. This extra investment is a temporary one; after five days, things were back to normal. These results show that males can fine-tune their sexual strategies according to the competition they face. Males who triumphed in combat didn’t feel the need to produce more sperm. They are strong enough to guard females they mate with and can stop other males from displacing his sperm with their own. Losers have to move about into new territories and when they do get to mate, they run the risk that a stronger male will just flush their sperm out with his own afterwards. For those who lose physical fights, contributing to the next generation means winning the spermwars, and doing that means producing more sperm. Reference: Biology Letters http://dx.doi.org/10.1098/rsbl.2010.0225

Could cuttlefish “see” with their skin? 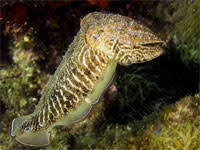 Cuttlefish and their cephalopod relatives, squid and octopuses, are capable of nature’s most spectacular acts of camouflage. They can change the colour of their skin on a whim, send moving waves of stripes down their body, and send messages to one another in shifting hues. This ability is even more incredible when you consider that, according to all evidence to date, cuttlefish are colour-blind. If they can’t actually see colour, how can they mimic it so accurately? Now, cephalopod specialists Lydia Mäthger and Roger Hanlon have made an intriguing discovery that could potentially answer this question. They found that a gene called opsinis active all over a cuttlefish’s skin; opsin proteins are sensitive to light and an essential part of the visual system. It’s possible that these animals can sense light using their entire skin, and that their colour-changing skill is based on this distributed “sight”. The idea isn’t without precedent. Some squid have organs on their skin that double as an extra pair of “eyes”. But so far, Mäthger and Hanlon’s idea is still a hypothesis. The skin opsins may have no significance at all and the duo has some work ahead to them to show that they actually play an important role. For a start, there’s some evidence that opsin-like genes are active in the skin of humans, and we certainly change colour without a significant amount of make-up. And the opsins in a cuttlefish’s fin, underside and retina are all the same, so it’s unlikely that they could discriminate between different colours. However, Mäthger and Hanlon suggest that the opsins may be useful in matching brightness and contrast. They could also interact with chromatophores – the tiny, expandable sacs of pigment that underlie a cuttlefish’s colour-changing ability. Chromatophores come in different colours and they could act as filters for the opsins. Light passing through these sacs could provide information on different wavelengths of light coming in from the environment. Reference: Biology Letters http://dx.doi.org/10.1098/rsbl.2010.0223

More on cephalopods: the squid with living, seeing flashlights, coconut-armoured octopuses, the mimic octopus, clever cuttlefish, and the secret signals of squid