Not Exactly Pocket Science is a set of shorter write-ups on new stories with links to more detailed takes by the world’s best journalists and bloggers. It is meant to complement the usual fare of detailed pieces that are typical for this blog.Bursting bubbles create rings of daughter bubbles Popping a bubble on a body of water seems like an unspectacular event, but there’s real beauty in what happens if you look at it carefully. For James Bird at Harvard University, that meant filming the exploding bubbles with a high-speed camera. His beautiful videos reveal that contrary to popular belief, a popped bubble doesn’t just vanish. Instead, it gives birth to a ring of smaller daughter bubbles, each of which can produce an even smaller ring when it bursts. The bubble’s curved nature means that the air inside it is at a higher pressure than air outside it. When a hole forms in the bubble, this pressure difference disappears and the film starts to recedes away. The film experiences an inward force along its surface, but an outward force at its rim – as a result, it folds outwards back onto itself, trapping a donut of air. The donut, however, is unstable and it soon breaks up into several smaller bubbles. The whole process takes place in a few thousandths of a second and it can only happen twice before the daughter bubbles get too small. This process is surprisingly common. It applies to liquids from water to oil, regardless of their viscosity, and it happens in soapy sinks and foamy oceans alike. Bird also found that the bursting of each daughter bubble released tiny liquid droplets into the atmosphere. These aerosols may be miniscule but they have a few important repercussions. They’ve been implicated in the spread of infectious diseases in swimming pools and hot tubs and they contribute to the cycling of chemicals from the oceans into the atmosphere. Reference: Nature http://dx.doi.org/10.1038/nature09069

More from Geoff Brumfiel at Nature

Image and video by C.Bird

Snakes on the wane (credit to Sciencepunk for the headline) 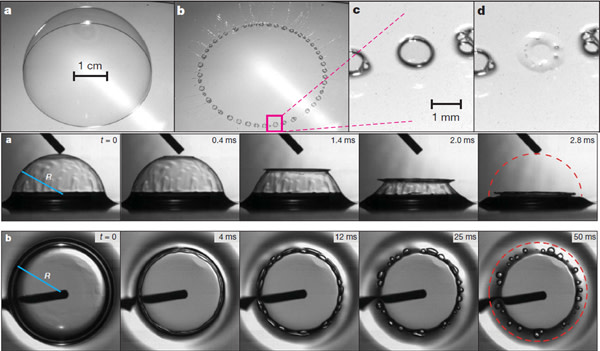 A depressing number of important animal groups are facing massive population crashes, including amphibians, corals and most recently lizards. Now snakes are the latest faction to join this pessimistic list. An international team of scientists led by CJ Reading did a survey of 17 snake populations, covering 8 species from the European grass snake to the African gaboon viper. They found that 11 of the populations have declined at an alarming rate since the mid 1990s, while 5 have remained relatively stable. The crashing populations all showed a “tipping point” trend, where their numbers suddenly and steeply fell over four years, after a lengthy period of stability. They’ve all levelled off since but one decade on, their numbers show no sign of recovering. The trends are worrying especially because we still have no idea what’s behind them. It’s telling that all of the five stable populations lived in protected areas, while the crashing species hailed from regions troubled by human activity. Their fates could be driven by falling habitat quality and a lack of prey. It’s also notable that all but one of the stable five are wide-ranging and active foragers, while the declining species are typically ambush predators that stay in the same restricted range. These “sit-and-wait” hunters are more vulnerable to human activity that disrupts the habitats they need to hide in, and they usually grow and breed slowly. Whatever the cause, it seems to be universal. Reading’s team found that tropical species like Nigeria’s rhinoceros viper are experiencing similar population crashes as temperate ones like the British smooth snake, and all within the same period of time. To Reading, this suggests that the declines share a common and widespread cause – climate change would be an obvious candidate but that needs to be tested.

More from the Guardian

// Photos by Fafner and Tim Vickers