Tigers can no more change their stripes than leopards can change their spots. That's a good thing too, for their unchanging patterns, as individually distinct as a human fingerprint, make it easier to track any single tiger over time.

That process is about to become even simpler with a computer programme that creates a three-dimensional model of a tiger's skin and can compare different shots of an animal taken at different times or angles. The programme is the brainchild of Lex Hilby from an organisation called Conservation Research and it could allow conservationists to track surviving tigers and to source the origins of poached skins.

Tigers are endangered and secretive animals and conservationists are increasingly relying on camera traps to take photos of them as they wander through the forests of Asia. The traps provide a series of tiger mug-shots, which trained experts can match to one another based on the pattern of stripes. That gives them valuable data about the population density of the tigers, how long individuals survive for, and how widely they travel.

But as you might imagine, matching photos by eye is a laborious job and it will only get harder as the library of tiger snaps gets larger. Hilby's software is designed to get around that problem, by automating the search process and suggesting only images from the back-catalogue that have a good chance of matching any new photo.

Tigers don't pose for camera-traps, so the software has to be able to cope with shots taken from a wide range of angles and with tigers adopting different postures. To do that, it creates a three-dimensional model of a tiger. 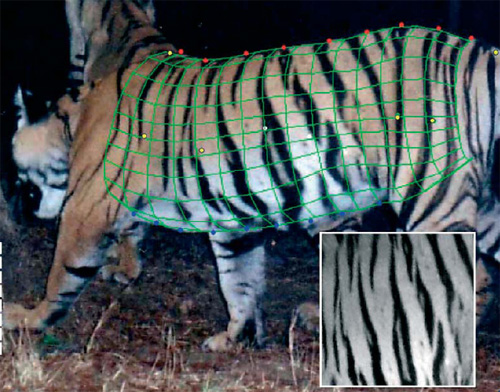 Users use coloured dots to indicate the position of the shoulder, hips and tail and the upper and lower margins of the image; the programme does the rest. It essentially unwraps the striped pattern from the tiger's flank and works out how it would look if it were laid out flat. It then compares the new image to every existing one and gives them a score based on how similar they are. The software is freely downloadable, and you can even have a go yourself.

Ullas Karanth from the Wildlife Conservation Society has tested Hilby's programme using photos of tigers taken in the Nagarhole and Bandipur reserves in India. Over the last two decades, his team have identified anywhere from 264 to 298 tigers by carefully comparing different images by eye. Hilby's programme analysed all of these shots, and for each image, it ranked all the others in terms of how similar they were.

The test was a success. For every image, the programme managed to place a photo of the same individual in the top spot 95% of the time, and in the top five positions on every go. It even managed to match up photos where the animal's stances were off by 66 degrees, or those that were taken up to seven years apart.

With such accuracy, Hilby is confident that the programme can successfully match a new image to a tiger already in the database, even if that individual is represented by a single photo. As the photo library grows, so too with the programme's infallibility.

Hilby also showed that he can also use his programme forensically, to trace the origin of illegally sold tiger skins. He used it to trace the origins of three skins confiscated from poachers in the last four years. Each one was strongly matched to a tiger in the photo library, and only one image where the skin was partially crumpled, posed any difficulties. 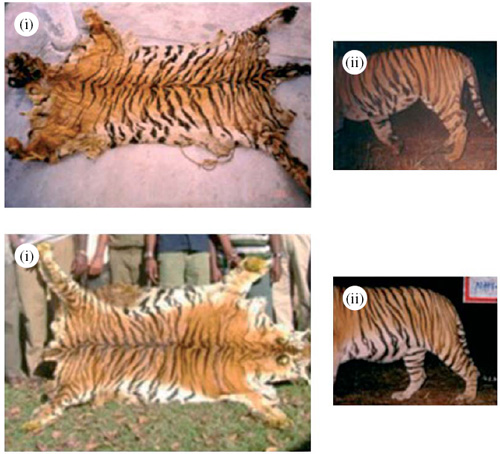 The programme could certainly be improved - at the moment, users have to mark out the boundaries of the tiger in each image by hand. Even so, that takes but a few minutes; at the moment, searching the entire image catalogue takes anywhere from 30 to 45 minutes. And Hilby is optimistic that the photo-fitting step could also be automated in the future.

But even in its current state, there's a lot of potential. The tiger programme is based on software that has previously been used for cheetahs and grey seals, and it could also be used to track individuals of other patterned species such as leopards, zebras and salamanders.