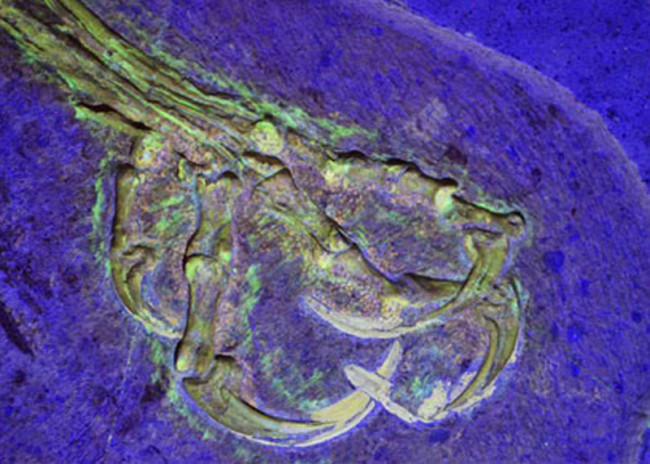 When in possession of a priceless dinosaur skeleton, it’s always a good idea to fire a super-charged photon beam at it. That’s Thomas G. Kaye’s philosophy: if you can fossilize it, you can fire a laser at it. Kaye, of the Foundation of Scientific Advancement, Sierra Vista, developed a laser-scanning technique that reveals stunning new details buried within dinosaur fossils — so meta. Now he’s traveling the world placing new specimens in his crosshairs. Kaye is joined by Mike Pittman, who’s already infamous at Discover for spotting fossils while taking a whiz in the Gobi Desert. Together, they’re trekking around the world armed with nothing more than their portable laser and an inquisitive eye. The duo has already published four research papers based on discoveries using their next-generation technology. Their technique, called ‘laser-stimulated fluorescence’ (LSF), blasts a high-energy light beam at targets, and minerals within fossilized material produce different wavelengths of light when the laser is fired, which makes it possible to see the geochemical differences in fossilized soft tissues — down to the microscopic level. Best of all, the method is completely non-destructive. 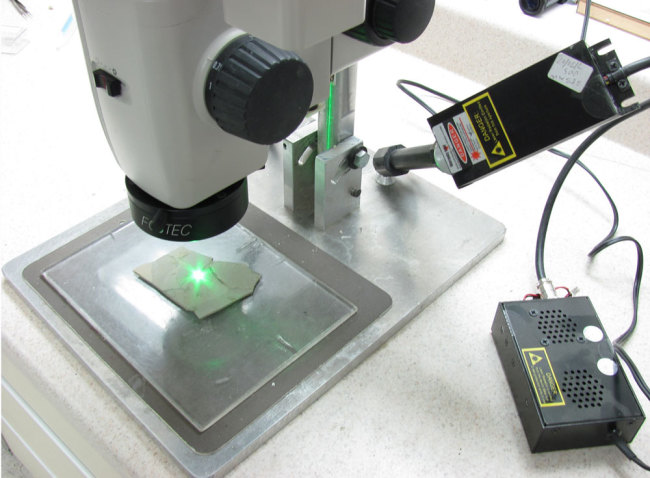 A laboratory LSF setup for table-top-sized specimens. (Credit: Kaye TG, Falk AR, Pittman M, Sereno PC, Martin LD, Burnham DA, et al. (2015) Laser-Stimulated Fluorescence in Paleontology. PLoS ONE 10(5): e0125923. doi:10.1371/journal.pone.0125923) Paleontologists have discovered a wealth of ‘soft tissues’ preserved in the fossil record. These include feathers, skin, scales and even fossilized dinosaur blood cells. Identifying what these are, and their geochemical fingerprint, has remained challenging due to the fragility and relative rarity of specimens. But LSF can help.

We now know about the colors of fossil feathers because they contain melanin—the same pigment that colors our eyes, skin and hair. But some dinosaurs preserve the fossilized remains of skin, and an exceptional species is Psittacosaurus, a small and early ancestor of Triceratops. One specimen, housed at the Senckenberg Museum in Frankfurt, Germany, not only preserves a weird bristly tail quiff, but also the remains of its flesh. 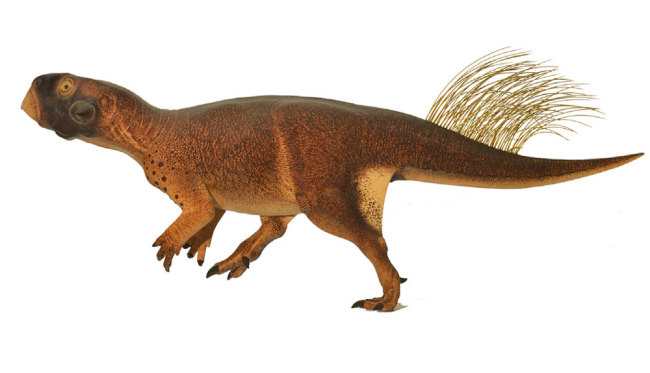 Psittacosaurus in all its strange glory. (Credit: Vinther et al., 3D Camouflage in an Ornithischian Dinosaur, Current Biology (2016), http://dx.doi.org/10.1016/ j.cub.2016.06.065) Kaye, Pittman and others revealed that the dinosaur’s topside was darker than its underside and tail; a physical feature called ‘countershading’ and associated with camouflage in modern animals. “Our Psittacosaurus specimen originally lived in a temperate forest with a range of different carnivorous dinosaurs, including some that were like Velociraptor and others that were smaller T. rex relatives,” says Pittman. Its camouflage pattern indicates that it likely lived in a closed habitat, such as a forest, with a thick canopy overhead. “Camouflage would have very been useful to Psittacosaurus in avoiding being eaten,” says Pittman. “The type of 3D countershading camouflage we uncovered would have been particularly useful in misleading predators lurking in the distance. Psittacosaurus definitely gave carnivorous dinosaurs a run for their money.”

The bristles on Psittacosaurus remained a paleontological paradox until Kaye’s team literally shed light on them. His team showed that these features are remarkably similar to the bristle-like structures found on distantly related theropod dinosaurs such as the bizarre therizinosaur Beipiaosaurus. It’s the equivalent of the ‘beards’ jiggled by modern turkeys. 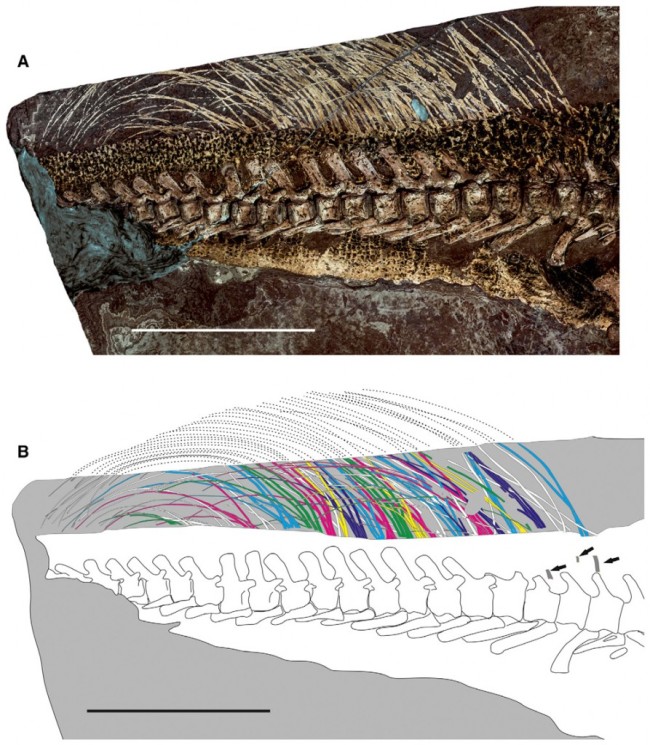 The Psittacosaurus tail fossil. (Credit: Senckenberg Research Institute) The bristles fluoresced in the same color as the skin, which was unusual because feathers and hair usually appear black due to carbon residue. Since similar colors mean similar geochemistry, the bristles were more like skin than hair. Without LSF the assumption would have been that the bristles were simply oversized hairs. The developmental origin of these bristles might be similar to the earliest appearance of feathers along the theropod dinosaur lineage. As Psittacosaurus is on the other major dinosaur branch, it implies that the evolutionary origins of feather precursors might have been an ancestral condition for all dinosaurs, and not just birds.

When the team fired its laser at a Microraptor specimen, from the fossil graveyards of Liaoning, China, it lit up like a galaxy. What to the human eye appears as a rather mashed-up bird on a boring slab of rock, LSF transforms into a psychedelic horror show. Intriguingly, the skull of this particular specimen fluoresces in a way that suggests it could be a composite, with part of the skull added from another specimen. 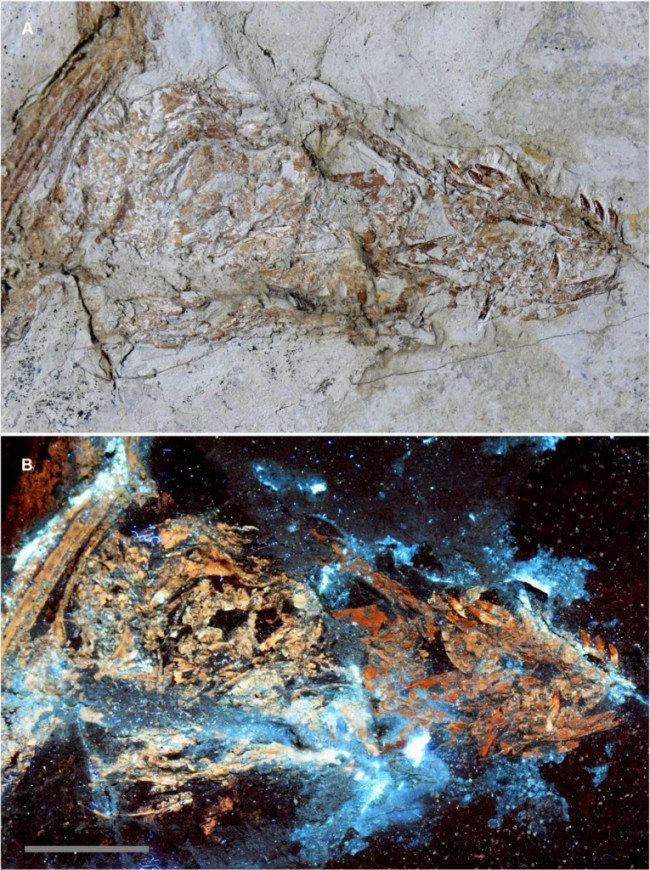 A skull composite? The Microraptor skull under white light, top, shows subtle color differences. Under laser-light stimulation, the bone fluoresces from differences in fossil mineralogy. (Credit: http://dx.doi.org/10.1371/journal.pone.0125923.g013) “Tom and I have laser-imaged thousands of dinosaur fossils and, aside from revealing soft tissue and bone details that were previously 'invisible' or unclear, it has helped us to identify potential composite specimens,” says Pittman. “In these specimens, we see specific bones or slabs that have fluorescence colors that are amiss from the rest of the specimen. We can then explore further using other instruments (e.g. CT scanning) to confirm if it has been compiled from the parts of several specimens.”

Similarly, Kaye and colleagues trained lasers at another important and well-studied ‘dino-bird’ fossil called Confuciusornis, also from China. Confuciusornis is remarkable in that it has feathers that contentiously suggest a flight capability, as well as long, paired tail feathers that might have been used for some form of ancient sexual display. The size and shape of Confuciusornis wings changes substantially when fluorescing. The length of the primary ‘flight’ feathers grew when viewed using LSF, revealing a true shape that’s broader and rounder than previous reconstructions suggested. The feathers were far more similar to what we see in modern forest-dwelling, or soaring, birds. LSF also revealed other fleshy structures in Confuciusornis, including its tendons, muscles, scales, and ligaments. Just like in pterosaurs and modern birds and bats, a pinkish chemical halo around the forelimbs of Confuciusornis reveals that it had structures known as patagia – membranes to assist in gliding or flight. 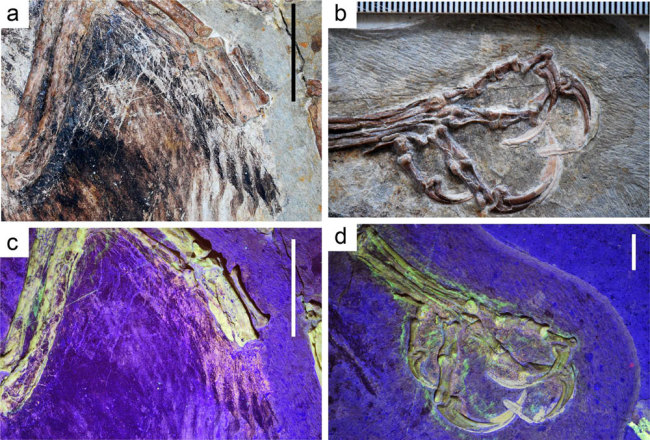 Confuciusornis seen under white light, top, and under LSF. (Credit: Falk AR, Kaye TG, Zhou Z, Burnham DA (2016) Laser Fluorescence Illuminates the Soft Tissue and Life Habits of the Early Cretaceous Bird Confuciusornis. PLoS ONE 11(12): e0167284. doi:10.1371/journal.pone.0167284) This provides strong support for what is known as the "trees down" hypothesis of early flight evolution, with Confuciusornis dwelling in the treetops, flying only for short distances from tree to tree in search of prey. Confuciusornis is a relatively early bird ancestor, which suggests that this behavior evolved quite early and was significant in the evolutionary success of birds. “The robust fleshy pads on the toes of Confuciusornis have small circular scales and their toes end in highly curved claws,” Pittman explains. “These features shown vividly by LSF strongly support a tree dwelling lifestyle. Confuciusornis could fly over short distances—it was not a migratory bird—and these were impressive flying capabilities for a primitive bird.”

As lasers of different wavelengths become more readily available to more than just your average megalomaniacal supervillain, we should see widespread adoption of LSF and hopefully even more chemical ghosts revealed in the fossil record. “Soft tissue data remains a key gap in our understanding of early flight evolution so hopefully we can help to fill it using LSF,” says Pittman. “At the moment we are revealing soft tissues in several fossil bird and bird-like dinosaur species to improve our understanding of the origins of birds and their flight capabilities. There is huge potential to use LSF to study dinosaurs and other fossils so we are looking forward to collaborating with a wide range of paleontologists to leverage this amazing technique.” Kayes and company will be taking his lasers underwater in early 2017 to fluoresce the sea life of coral reefs. They are also working with drones to fly a laser over the Badlands at night, scanning the ground using a blue laser in search of bones.