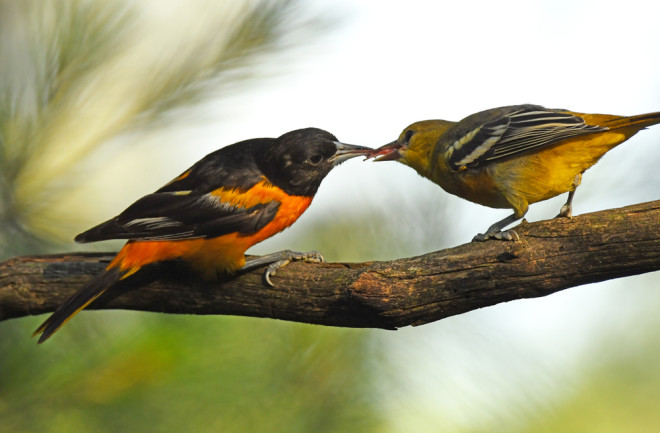 Two Baltimore Orioles. (Credit: Brian A Wolf/Shutterstock) In today’s world, it might seem like people aren’t connected to nature at all, instead opting to spend their time with modern conveniences like the world wide web. But new research shows that across the globe, people are still paying attention to what’s outside their window — and we can tell by looking at patterns in their Wikipedia pageviews. Scientists, led by conservation biologist-turned-data scientist John Mittermeier at the University of Oxford, looked at 2 billion pageviews for almost 32,000 plant and animal species across 245 languages. Their most striking finding, reported in a paper out today in PLoS Biology, was that a good chunk of these species showed seasonal patterns in their Wikipedia pageviews that matched their seasonal patterns in real life. “For some species, people are paying enough attention to when a bird arrives on its breeding grounds, or when a particular plant flowers,” says Mittermeier. “The fact that people are really responding to that is cool.” Besides being uplifting, the researchers hope their data could be used to help conservation groups home in on what drives people’s interest in species and when. Strong correlations between page views and species occurrences might also allow researchers in the future to track changes in the distributions of those species remotely.

Mittermeier started out examining Wikipedia pageviews for species for a different project when, he says, “just on a whim I was like, I wonder what would happen if I just plot pageviews [over time]? Having a background in birds and ornithology, I just happened to pick a migratory bird.” “I looked at [the graph] and just saw an immediate spike, like you see in [the figure in the paper], and I was just like, what the heck is this?” Here’s that figure for you. The first panel shows the English-language Wikipedia pageviews for three migratory birds, which only appear in the U.S. in the spring and summer, like orioles. You can see how views on their pages jump, the spike perfectly aligned with when they’re in town.

Daily pageviews in English-language Wikipedia for migratory and U.S. year-round resident bird species. Gray shading shows when it’s spring in the northern hemisphere. (Credit: Mittermeier/PLOS Biology) The researchers also found that year-round resident birds like chickadees, shown in the second graph above, show less of a seasonal swing, but still have more pageviews in the spring and summer. Mittermeier cautions us not to interpret any further than the data — for now — though it is certainly fun to hypothesize about why this might be. For instance, why does the American goldfinch, year-round resident in the U.S., also show seasonal swings? We can only speculate. It could be that bird interest in general is higher when the summer migrants are in town. It could be that people are outside more in spring and summer and notice more birds. Or, it could be that people only notice the finches when they’re in their bright yellow breeding plumage (goldfinches are gray-brown all winter.) Questions like these could be avenues for future research. “We ended with more questions than when we started,” says Mittermeier.

The researchers didn’t just look at seasonal biological events; they looked at seasonal human cultural events, too. For instance, great white sharks may be more popular on Wikipedia than the great American wild turkey 364 days of the year, but for a brief moment — Thanksgiving Day — the gobblers have their moment in the sun.

English language Wikipedia pageviews for the Great White Shark and Wild Turkey over time. The gray shaded area shows interest rising in spring (which is also turkey hunting season in the U.S.). The green dashed line is Thanksgiving Day. The shaded purple bar is the Discovery Channel’s annual Shark Week television event. (Credit: Mittermeier/PLoS Bio) But these cultural trends weren’t as striking as the seasonal ones. That was the most exciting thing, Mittermeier says. “We keep hearing in conservation of people not really connecting with ‘real nature,’ and I think I probably expected Wikipedia pageviews to be divorced from natural occurrences,” explains Mittermeier. “Maybe I was thinking more like when Planet Earth comes out, there’ll be a big spike for those species, and that’s going to be what drives (pageviews), and they’ll have nothing to do with biological patterns.” “But in fact… these cultural events (like Shark Week) do factor in, but in many ways they’re secondary to these broader biological patterns,” he says.

Besides being neat, this Wikipedia pageview data could serve as a good way to see which species people are interacting with and thinking about in their day-to-day life. That's information conservationists and policy planners would be very interested in. For instance, a group trying to raise awareness for a certain protected area could get real data on which of the species that live there are most interesting to people. It's helpful to have in-depth data because species of interest differ between countries, explains Mittermeier. His research could also reveal worldwide trends: What species is the most popular in the world, based on Wikipedia pageviews? “That’s the next paper,” says Mittermeier.