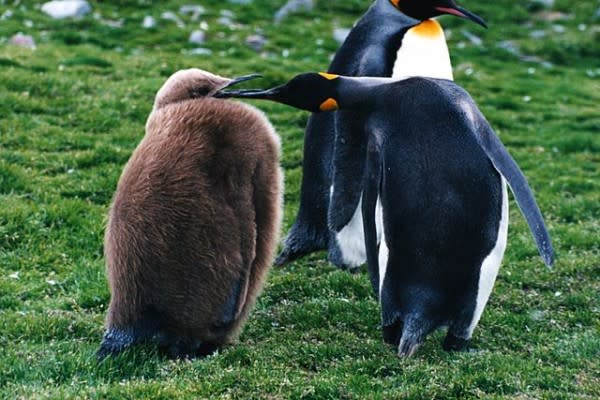 Three squawks for conservation! After New Zealand businessman Joseph Hatch boiled down 3 million Macquarie Island king penguins for their blubber, public outrage helped make the island a wildlife sanctuary in 1933. The king penguins then flourished undisturbed, growing from the decimated population of 3,400 to half a million today. Those raw numbers look good, but to gauge the population's viability, scientists needed to find out a little more. A new study has found that the population has also recovered to pre-slaughter levels of genetic diversity

, just 80 years after their near-extinction. Population bottlenecks like the one caused by Hatch's steam digester

mean not only fewer individuals but also less diversity in the gene pool. This makes it difficult for the population to adapt to any stresses---a disease, for example, that can wipe out the remaining population if everyone has the same immune system. To compare pre- and post-bottleneck genetic diversity, the researchers sequenced DNA from 1,000-year-old penguin bones on the island. The ancient DNA samples had similar levels of diversity as modern samples from the foot of living penguins. The researchers were surprised by how the population had recovered and saw this as a testament to conservation efforts. Conservation on Macquarie Island is still a tricky business. 19th-century visitors introduced rats and mice to the island. Then people brought cats to control the rodents. Conservationists started culling feral cats

that were attacking wild birds, but that meant no cats to keep in line the rabbits, which had also been introduced by early visitors. According to

"The rabbits have eaten so much grass that they are exposing penguin chicks to attack by skua birds. Their grazing has also triggered landslips, one of which partly buried a penguin colony in 2006." But compared to a description of king penguins chicks getting rendered into blubber oil in 1912

(pdf), you have to admit things are looking better:

About 2,000 birds are driven into a wire-netted yard and the gates are closed; a couple of men then enter with sticks and picking out the "one year olds" (which I might state are the only "fat" ones at this time of the year) they give them a knock on the head...The birds are then packed in huge boilers called "digestors" and steam is turned on to the pressure of 30lb every square inch for 12 hours. The oil is then run into settling tanks and subsequently barreled, while the refuse passes into chutes and into the sea.

Life After Death: What Human Burial Options Will Look Like in a Sustainable Future