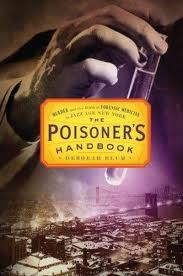 It has been three years since Penguin Press published The Poisoner's Handbook, the NYT-bestseller from none other than the indescribably incredible Deborah Blum. Three years. You really have no excuse if you haven't read it. But, if you are one of those unfortunate souls who has missed out, you're in luck: The Poisoner's Handbook has been adapted for TV, and will be premiering as a part of PBS' American Experience next Tuesday, January 7, 2014 at 8/7c. For those unfamiliar with the book, The Poisoner's Handbook tells the tale of Charles Norris, New York City's first scientifically trained medical examiner. Norris, with the help of his perhaps overdriven toxicologist Alexander Gettler, transformed forensics into a serious science during one of the most tumultuous times in American History: the 1920s. The reader follows along case by case as the dynamic duo solves the mysteries of some of the most puzzling deaths of the Jazz Age in New York. The book is awesome. I didn't want to put it down—so I didn't, for around the 8 hours it took for me to power through it in one sitting. It's one of the best books I have ever read, hands down. But there's no need to take my word for it—according to NPR, The Poisoner's Handbook “reads like science fiction, complete with suspense, mystery and foolhardy guys in lab coats tipping test tubes of mysterious chemicals into their own mouths.” "With the pacing and rich characterization of a first-rate suspense novelist, Blum makes science accessible and fascinating," said Publisher's Weekly. And Newsday said it was “as hard to walk away from as a CSI marathon.” I'm happy to report the PBS series is every bit as dynamic, engaging and impressive as the paper form. When I was offered a free review dvd of The Poisoner's Handbook, I jumped at the chance to preview the upcoming special. I had heard that a televised version was being produced, but I was honestly a little skeptical. The book was so good—I was worried that the TV version wouldn't live up to my expectations. To my welcome surprise, it exceeded them. Balancing the fine line between murder mystery and documentary, the series captures the captivating, case-driven nature of the book while staying true to the fact-based, scientific style of PBS. You really get to visualize the tales the book—from watching tissues be ground by hand to hunt for toxins to the devastating effects of radium. It is at times quite gruesome, yet somehow tastefully so—just enough to make you cringe and groan aloud. Overall, the series beautifully captures everything that made the book so special while taking full advantage of the visual medium that is television. But perhaps the best review comes from my roommate, who was preparing herself for a fancy night out when I just so happened to put on the series for my critique. "Can you turn it up?" she said, soon after I started the program. I obliged. Though she couldn't even see the television, I kept hearing exclamations from her bathroom. "WHAT?! Are you serious?!!" she shouted as one of the cases concluded. The series was so engaging that she hung on every word from two rooms away. I've been pretty disappointed by so-called educational television as of late, and it's both refreshing and encouraging to see the bar raised. I hope that Discovery Channel and others are taking note—this, for the record, is how you do a documentary. This is the kind of fascinating, intelligent and dynamic television that your audience is looking for. Congrats to Deborah and the entire production team on a job well done. Tune in January 7th to see what I mean! http://www.youtube.com/watch?v=wlR-d7_z3Sc