Parrots In Strange Places: A Fossil From Siberia 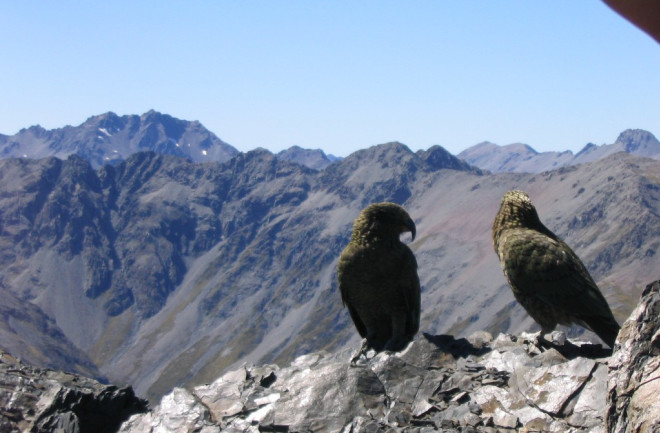 New Zealand Kea, the world's only alpine parrot, hang out atop Avalanche Peak in Arthur's Pass National Park on the South Island. The species is living proof that parrots, often associated with the tropics, can thrive in unexpected environments. Credit: Gemma Tarlach. Some dead parrots are more entertaining than others. And some, like the partial specimen described today in Royal Society Biology Letters, advance science in an unexpected direction. The first fossil parrot proof ever unearthed in Siberia suggests not only that Parrots of Yore had greater geographic distribution than we thought, but also that they may have spread via different routes than previously theorized. The 16-18 million-year-old parrot part making its debut today is, at first glance, not that much to get excited about. It is, after all, only a partial tarsometatarsus, a lower limb bone found in birds (and a few non-avian dinosaurs) that evolved as bones in the foot fused together.

Between toes and tibia, the tarsometatarsus exists in birds and some non-avian dinosaurs. Credit: Darekk2/Creative Commons. But the partial foot bone —the northern-most parrot fossil worldwide — does tell us something intriguing: parrots were in Siberia by the Early Miocene. Based on other fossils found in the same rocks, the climate of the location at the time may have been sub-tropical. The Early Miocene was a time of early parrot diversification, a veritable Parrotpalooza of environmental adaptation, but this little tarsometatarsus (the partial fossil is a mere 5mm long) is the first to be found in Asia during this period. That suggests that parrots weren't just evolving — they were on the move, spreading across continents earlier than we thought.

A Propagation of Parrots

The oldest parrot fossil from North America is about the same age as the Siberian parrot; both birds were flying at the start of what's called the Middle Miocene Climatic Optimum. During this time, Earth's climate was balmy enough to believe a bird most often associated with the tropics today might have made it across Beringia, the off-again, on-again land bridge that has occasionally linked Eurasia and North America. Previous models for the propagation of parrots have suggested that they might have spread via long-distance, trans-oceanic routes — no small feat for a non-migratory bird. Having fossils on both sides of Beringia by the Early Miocene, however, now points to possible dispersal over land instead, an arguably more plausible path for the non-pelagic parrots.