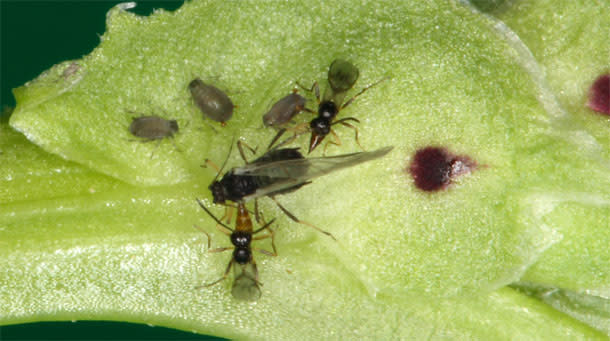 A black bean aphid is about to have a rough day. It has been targeted by a parasitic wasp, which lays several eggs inside its body. When the eggs hatch, the wasp grubs will try to eat the aphid from the inside out. If they succeed, the aphid will die, and the young wasps will burst from its corpse to find aphids of their own. But the aphid isn’t necessarily doomed. There’s a chance that it will resist the attempt to usurp its body. If it does, the wasps will have done it a favour. When the mother wasp implanted its eggs, it also infected the aphid with bacteria that protect against parasitic wasps. It inadvertently vaccinated the aphid against its own kind. Aphids and other insects often have bacteria living inside their cells. These microbes are known as endosymbionts, and they help out their hosts. Some like Buchnera help aphids to create nutrients that they don’t get from their food. Others like Hamiltonella defensa protect them against parasitic wasps, by somehow killing the wasp larvae. These beneficial bacteria are largely passed from mother to child, but they can also spread between unrelated individuals. Sex is one route – aphids, it seems, can benefit from sexually-transmitted infections. Some insects can also trade bacteria by drinking from the same plant. Now, Swiss scientists Lukas Gehrer and Christoph Vorburger have found a third route: wasps can spread the very bacteria that protect against them, by stabbing uninfected aphids after infected ones. Gehrer and Vonburger allowed two species of parasitic wasps to attack aphids that had no beneficial bacteria, after attacking those that did. The wasps stabbed many aphids, and only around 38 per cent of them survived. Of these survivors, 9 per cent had picked up defensive bacteria via their wasp enemies. Gehrer and Vonburger write that the wasp’s egg-laying tube (its ovipositor) “appears to act as a dirty needle that can inoculate previously uninfected aphids”. It’s likely that these aphids would now be vaccinated against future wasp infections, since H.defensa protects against parasites (although the duo still need to test this). That’s obviously not in the wasp’s interest. It, and its own offspring, would benefit from having as many unprotected aphids around as possible. It may be that the wasps have evolved some way to avoid passing protective bacteria between their targets. Maybe this explains why such transfers are so rare. Reference: Gehrer & Vorburger. 2012. Parasitoids as vectors of facultative bacterial endosymbionts in aphids. Biology Letters http://dx.doi.org/10.1098/rsbl.2012.0144Image by Christoph Vorburger More on endosymbionts