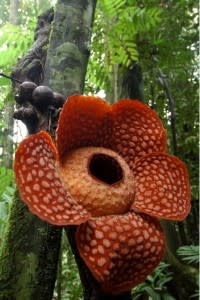 Rafflesia cantleyi, perhaps better known as the corpse flower for its pungent scent, steals everything from its host. Though each blossom can be in excess of three feet across, the massive buds cannot support themselves, and have no leaves, stalks or true roots. Instead, they rely entirely upon their vine host, Tetrastigma rafflesiae, for survival. Harvard researchers have now discovered that food and water aren't the only things the corpse flowers steal - over the course of evolutionary history, Rafflesia has also stolen Tetrastigma's genes. The corpse flower and its host have a very intimate relationship. From the start, Rafflesia burrows into the Tetrastigma's tissues, growing as thread-like strands in direct contact with the surrounding vine's cells. They are so dependant on their host that the corpse flowers have even lost the ability to make chlorophyll, a requirement for photosynthesis, and thus defy the very nature of being a plant by being unable to produce food from sunlight. These parasites feed off their host vines, growing and growing until they finally erupt, dramatically if briefly, into large, rubbery flowers that stink like rotting flesh. Somehow, after generations and generations of intimate contact between parasite and host, Rafflesia has ended up with more than the usual parasitic spoils. As a new study published today in BMC Genomics reveals, the parasite expresses dozens of genes that it has co-opted from its host. The passage of genes from distant lineages, such as the corpse flower and its vine host, is known as horizontal gene transfer. Though common in bacteria (e.g. the transfer of antibiotic resistance), it is much rarer in plants and animals, and we still don't fully understand how it occurs. Scientists were first alerted that something was a little off with Rafflesia several years ago. At that time, they were looking at a much bigger picture - the overall evolution of parasitism in plants - when they noticed something a little odd in their data. For one of the genes, Rafflesia and similarly deeply-embedded parasites didn't appear to be related to their closest kin, and instead, appeared to be cousins of their hosts. They hypothesized that such a strange evolutionary relationship could only have evolved in one way: if the parasites had stolen that gene. Now, the Harvard team has sequenced all of the active genes of both the corpse flower and its host to determine how many genes were stolen. Researchers found that 49 of the proteins expressed by Rafflesia - 2% of its transcribed genome - are bootlegged. "We found that several dozen actively transcribed genes likely originated from the flower's host," said Zhenxiang Xi, first author and a graduate student at Harvard University. They also found that most of these genes were incorporated into the parasites own DNA, even replacing similar genes, and another third of Rafflesia's own genes have evolved to look more like the vine's. The genes that were stolen perform a wide variety of cellular functions, including roles in respiration, metabolism, mitochondrial translation, and protein turnover. Their active expression suggests that they play a key role in the parasite's survival, but the researchers hope that future research will determine exactly how important these genes are and whether they help the parasite evade detection by the host's immune system. "These findings might reflect a sort of genomic camouflage, or genomic mimicry for the parasite," says Charles Davis, co-author and head of the lab at Harvard. A bacterial pathogen of citrus trees, for example, produces a hijacked protein which limits the victim's ability to detect and remove the intruder. What's truly remarkable about this study is that the rate of gene transfer between the vine and its parasitic corpse flower is as high as rates of lateral gene transfer seen in bacteria. Never before have scientists thought that horizontal gene transfer could play such a pivotal role in the evolution of plants and animals, let alone in parasite-host relationships. Given that parasites make up for an astounding 40% of the species on Earth, these findings are bound to transform our understanding of evolutionary processes and how we ended up with the diversity of life we see today.