Overfishing gives toxic seaweeds an edge in their competition with corals

The world’s coral reefs are disappearing. At least a third of the world’s reef-building species face extinction and in the Caribbean, the average cover of hard corals has fallen by around 80% in the last thirty years. The rich habitats they create are giving way to simpler, less vibrant communities, dominated by seaweeds. But seaweeds aren’t just opportunistic colonisers of waters abandoned by corals – they are coral-killers themselves. Douglas Rasher and Mark Hay from the Georgia Institute of Technology have found that grazing fish typically keep seaweeds in check. If those fish start disappearing, as they often do because of human hooks, the seaweeds run rampant and corals suffer. Anywhere between 40-70% of the most common seaweed species release compounds that drive away the algae that allow corals to derive energy from the sun. Bereft of energy, the corals ‘bleach’ and die. The message is clear – through overfishing, we are accomplices in seaweed-mediated coralcide. “Seaweed” is a loose colloquial term for a wide variety of algae, which hail from a few different kingdoms of life. For a while, it’s been clear that they can compete with corals for the same patches of ocean, but the exact nature of that competition has been controversial. To settle the debate, Rasher and Hay set up field experiments in two different reefs, one in Fiji and one in Panama. In both cases, they pit the common coral Porites porites against seven common species of local seaweed. The competitors were lashed against one another using a grid and some rope and left in place for 20 days. At such prolonged close quarters, the corals became heavily bleached compared to others that were seaweed-free. Their ability to photosynthesise was shot by anywhere from 52 to 90%. Only the parts that actually touched the seaweeds were harmed; the areas on the sides stayed healthy. 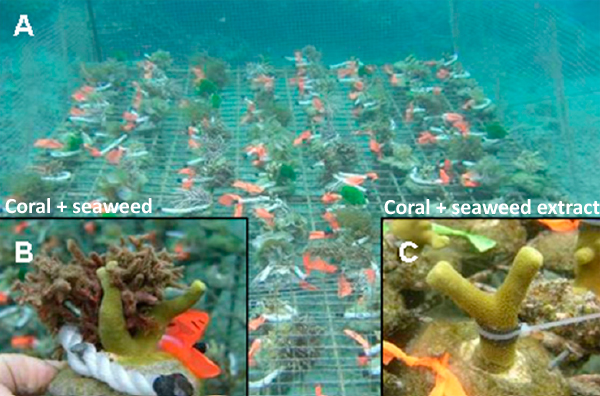 It’s possible that the seaweeds damage the corals by shading them from precious energy-giving sunlight, or by cutting into them with sharp edges. But when Rasher and Hay exposed the corals to man-made substances that mimicked the same effects, nothing happened. Instead, the real reason for the corals’ malaise was a chemical attack by the seaweeds. Rasher and Hay liquidised some of the seaweed species and applied the fat-soluble parts of these extracts to the corals. The result was the same levels of bleaching and disabled photosynthesis as before. This clearly suggests that seaweeds secrete a number of chemicals that damage corals whenever the two competitors touch. Some of the most chemically active species started hurting the corals after just two days of contact. Rasher and Hay also showed that fish are extremely important for keeping seaweed at bay. In Fiji, they did their field experiments in cages designed to keep hungry fish away. After it was over, they transplanted the seaweeds to two sites. The first was a marine protected area where fishing is banned, coral cover is high and seaweed is rare; there, fishy gardeners cleared away 40 to 100% of the seaweeds, depending on the species. The second site was a heavily fished reef just 300 metres away where seaweed is king and coral is rare. At this location, the surviving fish removed just 0 to 40% of the seaweeds. So as humans remove fish from a reef, we remove the gardeners that would normally keep seaweeds in check. That gives them an advantage in their chemical competition against corals, damaging the reefs. As the seaweeds become more abundant, the coral density falls, the fish they can support start to dwindle and the seaweeds gain an even greater edge. Rasher and Hay think that even a modest level of fishing can set off this vicious cycle. And as gardeners, some fish are more valuable than others. The same chemicals that harm corals also deter many grazers from feasting on seaweeds, which makes those that can stomach these morsels that much more vital for the health of a reef. For example, a single species of fish – the streamlined spinefoot – is responsible for eating almost all of the seaweed Chlorodesmis fastigiata. If this one species were to be overfished, the risks to corals could be substantial. It’s yet moreevidence to support increasing the proportion of coral reefs that are protected by complete fishing bans. Reference: PNAS http://dx.doi.org/10.1073/pnas.0912095107More on corals: