Try science for yourself: Join one of these citizen science projects; lab coat optional. 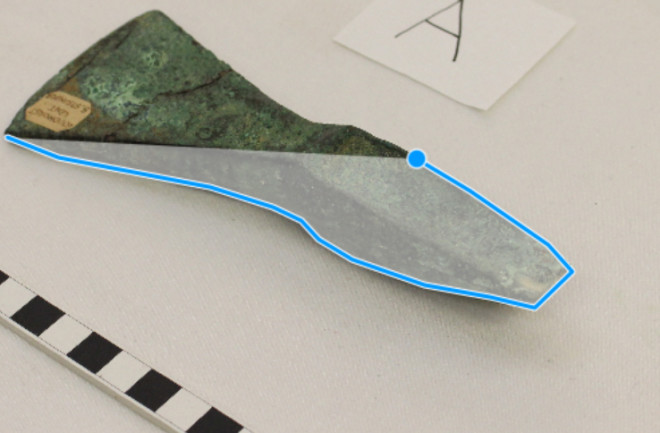 Be an armchair Indiana Jones and help researchers decipher field notes from generations past or create digital images of Bronze Age artifacts (top). | College of London and Trustees of the British Museum

We don’t have to tell you that science is cool. But actually contributing to research that’s refining our understanding of life, the universe and everything is a rush. Try it yourself: Join one of these citizen science projects; lab coat optional.

Find out which furry creatures are in your backyard with eMammal. Volunteers set up infrared-activated camera traps and monitor them for mammals, including predators such as coyote and the weasel-like fisher. Originally focused on natural areas in the mid-Atlantic, the program is expanding its range across North America, including urban centers.

Researchers want to examine how populations and diversity change as the animals move from wild and rural areas to suburbs and cities. Anyone with a Reconyx or Bushnell brand camera trap ($200-$500) can participate, but wildlife enthusiasts around Raleigh, N.C., and Washington, D.C., can sign up to borrow a camera trap from eMammal.

Secure the camera trap in your yard or, with permission, a nearby park. Then transfer photos from the memory card to your computer, where you can identify and submit the species observed using eMammal’s downloadable software. The program, currently focused on eastern mammals, will be updated this year to include species throughout North America and, eventually, the world. Go to eMammal.org for sign-up, software and instructional videos.

Admit it: You waste time watching Internet videos of cute babies. Now do it for science.

Many of us might think babies pick up new words by observing how grown-ups talk about their surroundings. But do they? Adults often speak with each other about things in other places (“We tried that new restaurant”) or in the abstract (“How’s work?”).

The social scientists behind GamesWithWords.org are now asking you to watch 15- to 30-second clips of baby videos and take note of what attracts the tykes’ attention. Researchers hope analyzing these Vine-like vids will help them understand the world in which little ones acquire language. Visit Baby World online to learn more.

You and your smartphone can help the American Meteor Society (AMS) determine the path of extremely bright meteors known as fireballs. Download the free AMS Meteors Reporting app for Android or iOS devices.

When you spot a fireball — anything brighter than the planet Venus — open the app and point your phone to where you saw the fireball appear and disappear in the sky to capture its start and end points. Then, wave your phone or swipe the screen between the points at the same speed as the fireball and gather data used to calculate the meteor’s velocity. You’ll repeat each step three times to increase your report’s precision. The app accurately records latitude and longitude and determines several more measurements, resulting in major improvements to your report’s reliability and usefulness.

Be an armchair Indiana Jones and help researchers decipher field notes from generations past or create digital images of Bronze Age artifacts (top). | College of London and Trustees of the British Museum

In the British Museum Bronze Age Index project, you transcribe scanned catalog cards — some a century old and filled with handwritten notes and illustrations — from an archive of the museum’s Bronze Age collection that features weapons and tools more than 4,000 years old.

In a related project, Photo-Masking of British Museum Bronze Age Objects, you use your computer mouse to draw an outline around bronze axes photographed from the same collection. This technique, known as photo-masking, separates the artifact from its background and happens to be something humans do more accurately than computers. Museum curators can then use these clean image outlines to create high-quality 3-D models of the artifacts to compare and identify variations in style and origin.

University College London and the rest of the MicroPasts team are expanding the platform so volunteers can also create and fund their own archaeological research projects.

This all-volunteer group in the San Francisco Bay Area believes technology can connect people to the natural world. Each month, Nerds for Nature hosts a variety of collaborative projects and events based on members’ skills and interests. During their popular “bioblitzes,” you converge on a park or green space and document every single life form found using the free smartphone app iNaturalist.

Bioblitzes have taken a remote-controlled submersible under Oakland’s Lake Merritt, and in the future may take to the skies via drones, through a U.S. Geological Survey collaboration, to collect environmental data, such as the paths of migrating animals. The group is also monitoring the ecological recovery of Mount Diablo State Park after a 2013 fire. Hikers take photos at camera stands around the park and submit them via social media.

You can learn more and join at MeetUp.com. Not in the Bay Area? Visit NfN’s new online guides to check out bioblitzing in your neck of the woods.

USGS iCoast: Did the Coast Change?

In 2012, Hurricane Sandy’s intense wind and waves reshaped hundreds of miles of coastline. After Sandy made landfall, U.S. Geological Survey (USGS) scientists took an unprecedented 9,000 aerial photos of the shoreline from Montauk, N.Y., to Cape Lookout, N.C. Surprisingly, although the damage in the aerial photos is obvious to human eyes, computers have a tough time quantifying it. The photos have too many topographical variables, from dunes and roads to marshes and beaches.

“It’s like asking a face recognition [program] to also recognize different species, age and mood,” says USGS oceanographer Nathaniel Plant. Help the agency document the damage by comparing before-and-after photos of the coast with the online app USGS iCoast: Did the Coast Change?

After creating a free account, you’ll analyze pre- and post-storm images, identifying various features and noticeable changes to the landscape.

These real-world observations will help USGS scientists fine-tune their models and improve their damage predictions before the next big storm. The USGS collects an average of 3,000 aerial images per storm, so iCoast will be expanded to include past storms and those that hit our coasts in the future.

Still searching for that perfect project? Check out SciStarter.com for a searchable index of hundreds of citizen science projects.