Our Ancestors’ Big Babies May Have Shaped Human Evolution 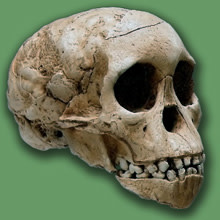 Babies: As we reported yesterday, they just keep getting bigger. And while they haven't always been trending towards obese, human babies have always been larger, relative to their mothers, than the infants of most other species. This make birth difficult and could have even changed the social structure of early hominids, steering human evolution. Human babies are about 6.1 percent of their mother's weight at birth, while chimp babies are about 3.3 percent. A new paper published in the Proceedings of the National Academy of Sciences takes a look at our extinct relatives to determine when this shift occurred, and suggests that it could even have encouraged our ancestors to come down from the trees and to form more complex social arrangements.

As anthropologist Jeremy DeSilva of Boston Univeristy pointed out in his new paper, "carrying a relatively large infant both pre- and postnatally has important ramifications for birthing strategies, social systems, energetics, and locomotion." [Scientific American]

DeSilva determined baby sizes from the brain and body sizes of extinct hominids including 4.4-million-year-old Ardipithecus ramidus (represented by Ardi

, but he used a standard formula to estimate size and weight across the species he studied. He determined that the shift from smaller to larger babies happened around the time of Lucy--Australopithecus babies were about 5 percent of their mother's weight, DeSilva says. Evolutionary biologists believe that Australopithecus also had less hair (which smaller chimp babies cling to) and had lost the strong climbing toes seen in earlier hominids.

With Australopithecus, arboreal living would be "a more dangerous activity," DeSilva wrote, noting that bipedal, less hairy mothers would have to park their young or actively carry them. [Scientific American]

DeSilva believes that these larger babies indicate that mothers needed help caring for their babies while also providing for themselves, which might have affected their social structure.

Their mothers would have faced the challenge of finding nutrients for themselves as well as breast-feeding the babies, "and would have benefited from the help of pair-bonded males, older children or siblings, or a combination of these," [said DeSilva.] [MSNBC]

DeSilva can't be sure whether the morphological or social changes came first (it's possible they evolved simultaneously), but he is convinced that child size had a big impact on Lucy's ability to live in the trees.

"The causality arrow on this, I'm not sure.... The data I played around with just shows that this group, Australopithecus, was birthing bigger kids than we thought. I think that has implications for reconstructing their biology." [MSNBC]

DISCOVER: Was Lucy a Brutal Brawler?