Our Alien Atmosphere? Earth's Gases May Have Arrived Here Aboard Comets 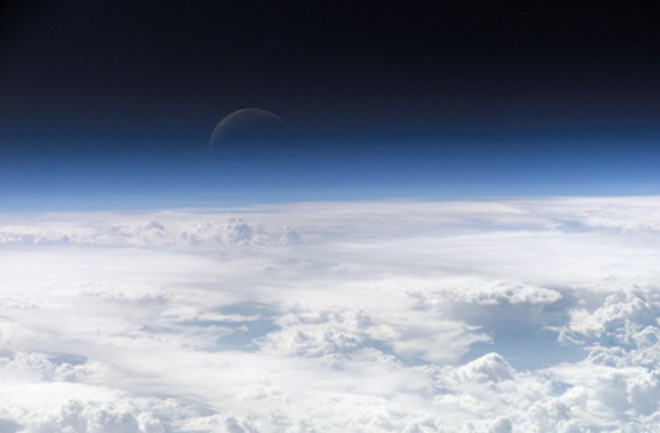 Krypton and xenon make up trace amounts of the Earth's atmosphere—about one part per million for the former, and even less for the latter. But these minor components could have a major impact in scientists' understanding of how the atmosphere came to be. According to findings published in Science, many of the atmosphere's gases that you're breathing right now might have come from outer space rather than inside the Earth, as previously thought. Researchers believed that when the Earth congealed from the gas and dust cloud that formed the solar system, some gases got trapped in the planet's mantle.

Then, over hundreds of millions of years, volcanic eruptions returned the gases to Earth's surface, where gravity kept them from drifting off into space. The mixing of these gases--along with the oxygen and other molecules added by life--created the atmosphere we have today [ScienceNOW Daily News]

. That's been the common wisdom, anyway. The new study by Chris Ballentine shakes up the idea. His team found a place in New Mexico where they could measure krypton and xenon that had never reached the surface, even after billions of years, and thus remained uncontaminated by our atmosphere.

The prevalences and isotope ratios of the noble, or inert, gases, such as neon, argon, krypton and xenon, provide a valuable tracer of ancient processes, because they are chemically nonreactive and so do not change much over time [Scientific American]

. What the team found didn't match the established ideas about an atmosphere produced by volcanic eruptions. The red flag was in the isotopic ratio—the relative abundance of certain isotopes to others, like lighter krypton-82 versus heavier krypton-84. If you look at krypton, the isotopic ratio in the Earth's atmosphere is more tilted toward the heavy side than that sun's is. According to the established model, this is true because new batches of these gases in the mantle came up to the Earth's surface and replace some of what the atmosphere loses to outer space. But, for the math to work out, the gases coming up from the mantle have to be similar in isotopic ratio to the sun's. One problem: That wasn't the case for the krypton Ballentine drew from the New Mexico mantle. It had an isotopic ratio tilted even further toward the heavy side than either the sun's or the atmosphere's. Actually, it matched closely to the krypton found in meteors. The upshot is this: If our atmosphere's gases didn't come from the interior of the planet, which is what Ballentine's data suggest, then where did they come from?

Based on their research, Ballentine and colleagues claim that our atmosphere likely formed when gas and water-rich comets bombarded Earth, shortly after its formation 4.54 billion years ago [National Geographic News]

. Upon impact, the comets' ice would have evaporated and left behind elements like krypton and xenon. The team now must sample similar sites in other locations to see if their findings hold up—perhaps, skeptics note, there really was a reservoir solar-type krypton in the mantle, but now it's gone. Ballentine's team plans to take a look at the isotopic ratios in the comet material that NASA's Stardust mission brought back to Earth. It they're right, though, then we're not just made of "star stuff," as Carl Sagan was fond of saying, but also breathing comet stuff every day. Related Content: 80beats: Study: Strange Planet Has an Atmosphere of Gaseous Rock–And It Rains Pebbles DISCOVER: NASA Takes a Wild Comet Ride DISCOVER: 10 Obscure Elements That Are More Important Than You'd Think Bad Astronomy: Stardust Sample Exceed All Expectations Bad Astronomy: When Did Earth's Oxygen Atmosphere Appear? Image: NASA