This is an updated version of the first post I wrote this year. The scientists in question were looking at ways of recruiting bacteria in the fight against mosquito-borne diseases, such as dengue fever. They've just published new results that expand on their earlier experiments.

Mosquitoes are incredibly successful parasites and cause millions of human deaths every year through the infections they spread. But they are no match for the most successful parasite of all - a bacterium called Wolbachia. It infects around 60% of the world's insect species and it could be our newest recruit in the fight against malaria, dengue fever and other mosquito-borne infections.

Wolbachia doesn't usually infect mosquitoes but Scott O'Neill from the University of Queensland is leading a team of researchers who are trying to enlist it. Earlier this year, they published the story of their first success. They had developed a strain that not only infects mozzies, but halves the lifespans of infected females. Now, as the year comes to an end, they're back with another piece of good news - their life-shortening bacteria also guard the mosquitoes from other infections.

It protects them against a species of Plasmodium, related to the parasite that causes malaria in humans, as well as the viruses responsible for dengue fever and Chikungunya. Infected insects are less likely to carry parasites that cause human disease, and those that do won't live long enough to spread them. It's a significant double-whammy that could have a lot of potential in controlling mosquito-borne diseases. 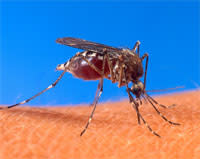 Using Wolbachia for biological control makes sense because the bacterium uses many self-serving strategies that allow it to spread like wildfire. And because it's transmitted in the eggs of infected females, all of its strategies involve screwing over male insects, whose sperm are useless to it. Sometimes it kills males outright before they're even born. Sometimes, it turns them into females.

In other subtler cases, it ensures that infected males can only mate successfully with infected females. If they try to breed with uninfected ones, the embryos die at an early stage of development. This strategy is known as "cytoplasmic incompatibility". It gives infected females (who can produce living young with any male they like) a competitive advantage over uninfected females, who can only start the next generation with uninfected males. Once Wolbachia gets a foothold in a population, massive swathes of it eventually become carriers. This is exactly what O'Neill's strain does - it induces complete cytoplasmic incompatibility. Once introduced into a natural population, it should invade with tremendous zest.

The strain also halves the lifespan of the Aedes aegypti mosquito. This might seem like a flimsy victory, but it's an important one. Once an individual sucks up a mouthful of infected blood, it takes two weeks for any parasites or viruses they've drink to reproduce in their gut and travel back to their salivary glands. Only then do they become infectious. This means that mosquitoes only really pose a threat to human health once they're old and they are fairly short-lived insects anyway. Any technique that slashes their already limited lifespan will have a huge impact on controlling the diseases they carry.

Even though Wolbachia lowers a female's lifespan, they don't hurt her egg-laying ability, or kill her off before she gets a chance to breed. So a Wolbachia-based approach would never drive a mosquito to extinction - it would just kill older individuals before they become capable of spreading disease.

Now, O'Neill's team, led by Luciano Moreira, have found that their Wolbachia recruits have a second advantage - they stop mosquitoes from becoming vectors for the viruses and parasites that cause human disease. The bacterium almost entirely prevented infections by dengue virus, even if it was injected directly into their bodies. Even after five generations of breeding with wild mosquitoes, the offspring of the Wolbachia carriers still resisted dengue virus. Moreira found similar results for the Chikunguya virus.

He also pitted his Wolbachia­-carrying mozzies against Plasmodium  gallinaceum, a parasite that infects birds, but is closely related to P.falciparum that causes human malaria. A week after the mosquitoes had fed on contaminated blood, Moreira found 26 times less Plasmodium DNA in insects defended by Wolbachia, and the number of individuals that could potential transmit the parasite had halved.

Wolbachia sets the mosquito's immune system on high-alert, switching on a few important immune system genes. Even if any viruses or parasites slip through, it's possible the bacterium outcompetes them for important nutrients like fatty acids and cholesterol. The viruses responsible for dengue and Chikunguya need cholesterol from their host to replicate themselves and Plasmodium needs a loan of fatty acids. But Wolbachia demands these molecules too and Moreira thinks it may simply be better at fighting for them.

So far, so promising, but O'Neill acknowledges that there's a lot of work to be done before his strain of Wolbachia can prove its worth for human health. So far, he has only shown that it interferes with infection by P.gallinaceum and not the Plasmodium species that causes human malaria. Likewise, he has only shown that Wolbachia does the job in the A.aegypti mosquito, rather than Anopheles gambiae, the main vector for human malaria.

Then there are the practical aspects. It's likely that Wolbachia's anti-male strategies will allow lab-infected mosquitoes to rapidly spread the bacterium. Certainly, earlier studies have found that Wolbachia can infect an entire laboratory population of mosquitoes within just a few generations. But that still needs to be tested, first in contained greenhouse settings and then later in field experiments. Computer models will also help to understand whether releasing infected mosquitoes will make a sizeable dent in the wild population, how long that would take, and whether resistant strains would eventually evolve.