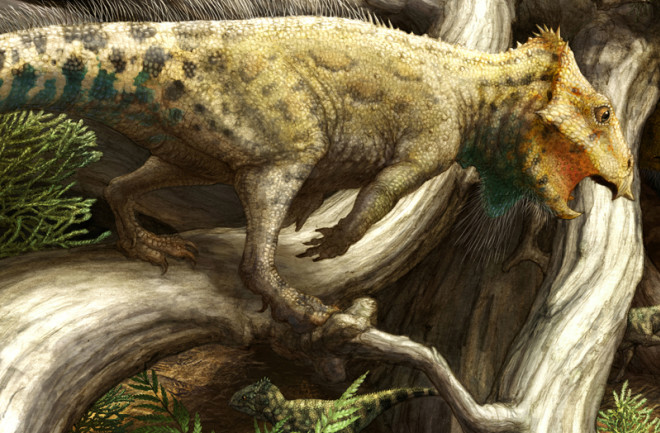 An artist's reconstruction of Aquilops in its environment in ancient Montana. (Copyright Brian Engh, courtesy of Raymond M. Alf Museum of Paleontology) Big things sometimes come in small packages, and that was certainly the case for a recent fossil finding in the United States. Paleontologists working in southern Montana unearthed a 3-inch beaked skull with pointed cheeks, which they believe is the oldest definitive evidence of a horned dinosaur in North America. Though small, the skull helps fill gaps in the evolutionary history of horned creatures on this continent.

Fossil remains of horned dinosaurs, called neoceratopsian, have been found throughout North America, but the fossil record of these creatures is incredibly limited further back in time. That’s been a hang-up for paleontologists because the late Early Cretaceous period (roughly 113 to 105 million years ago) was a time of important diversification for horned dinosaurs. In Asia, a collection of well-preserved fossils spells out this evolutionary history vividly, but fossil evidence in North America was limited to isolated teeth and bits of skulls. The tiny skull paleontologists found in Montana’s Cloverly Formation is the first horned dinosaur from the Early Cretaceous that could be identified to the species level. The dinosaur, named Aquilops americanus, had a beak-like nose and sharply pointed cavities over its cheeks. The prehistoric horny creature probably grew to be the size of a crow.

Aquilops bears a striking resemblance to the horned dinosaurs that were living in Asia during the same period of time. Therefore, paleontologists believe a series of migratory events between Asia and North America ensued during the Early Cretaceous, which enriched the diversity of neoceratopsian species. The exact route these wandering dinosaurs traveled to and from Asia in unclear, though researchers say Aquilops probably made it to North America across the Beringian land bridge. They published their findings Tuesday in the online journal PLOS One. The study’s authors say species in Asia and North America were isolated and connected multiple times in the past, based on the dispersal and kinds of fossils found on each continent. However, determining what these events were and how they occurred will require more fieldwork. But one thing we do know now, horned beasts were living in North America for a lot longer than we thought.