Oldest Fossils Ever Found Give New Clues to Life’s Origins 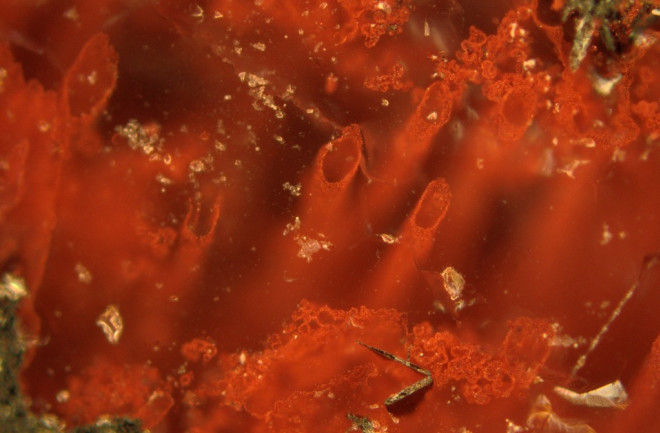 Haematite tubes from the hydrothermal vent deposits are said to be the oldest microfossils and evidence for life on Earth. (Credit: Matthew Dodd) Four billion years ago, as a faint young sun beat down on the newly-formed Earth, a cluster of creatures—each less than half the width of a human hair—were already thriving around volcanic vents. In a study published Wednesday in Nature, researchers say they’ve found the microfossil remnants of organisms that, if confirmed, lived at least 3.77 billion years ago. The findings add a new puzzle piece for researchers trying to travel backward along the tree of life seeking the so-called Last Universal Common Ancestor. Some geneticists think this microbial "Eve" would have evolved around hydrothermal vents 4 billion years ago. “This makes life appear to be a relatively easy process to kickstart on the planet,” says Matthew Dodd, a Ph.D. student at the University College London.

Dodd ventured to one of Earth’s oldest rock formations, Canada’s Nuvvuagittuq Supracrustal Belt, in hopes of findings these early signs of life. Previous research had already shown these rocks likely formed in hydrothermal vents. But what he found was surprisingly robust evidence that life here was already fairly evolved. “The microfossils already contain significant complexity,” says Dodd, who was lead author on the research. He points to microscopic features like twists and curls that scientists would expect from more advanced microbes. “These features show life had evolved beyond a simple cell occurring by itself — like a protocell.” We know modern hydrothermal vents are home to all manner of complex life — including 10-foot-tall tube worms, crabs, clams, etc. And the microfossils found at the ancient vents are more like the bacteria found around vents today.

Bound to Be Debate

The researchers knew their claim of tiny creatures in 4-billion-year-old rock would be controversial. So they systematically detailed several lines of evidence. The team studied the tiny fossils using a high tech microscope that let them examine the surrounding chemicals and minerals. And they found a kind of carbon that looks like it’s been eaten by microbes. That alone wouldn’t have been enough though, so the team also sought out—and found—chemicals created by decaying organic matter; nearby, were little granules called concretions that also had this organic matter in them. “All these independent lines of evidence tell us that these microfossils are indeed biological in origin,” Dodd says. Inorganic processes just can’t explain it, according to the researchers. Some have criticized the findings by pointing out that the rocks appear to to have been volcanically heated more recently, which makes the microfossils dubious. But the team says part of the reason they were preserved is because the fossils were sealed in a time capsule of sorts—the iron is locked inside quartz. Dodd says their findings mesh well with life starting at a hydrothermal vent. However, he also points to a study published in Nature last September that found 3.7 billion year old stromatolites in southwest Greenland — not far away from these microfossils. Stromatolites are built by microbes living in shallow seas and feeding on sunlight. That means these two vastly different lifeforms thrived on two totally different energy sources just 70 million years apart. Previously, the oldest microfossils found around hydrothermal vents were a mere 3.2 billion years old — 500 million years younger. And scientists have found other potential signs of life around hydrothermal vents in Greenland from 3.8 billion years ago. But there’s still some question as to how old these hydrothermal vent rocks are. And depending on their exact age, the life forms could be as much as 4.28 billion years old. That would likely put these fossils within 100 million years of the origin of life. That’s a mere second in geological terms, but it's also more time than separates humans from dinosaurs. “Depending on how the age controversy of these rocks plays out, we may have very different question and answer to where the origin of life may have been on earth,” Dodd says.

His next step is to travel to similarly old rock sites around the planet and suss out the origin of their organic matter. That could reveal whether the planet was already covered in life 4 billion years ago or whether it was isolated in a few pockets around stromatolites and hydrothermal vents. All these findings have a cosmological angle too. The ease of starting life on Earth implies we should find aliens living elsewhere. “At this time in the evolution of the solar system, we also think that Mars had liquid oceans at its surface, which strongly suggests that we should have had life evolve on Mars as well,” Dodd says. “If we don't find evidence of life on Mars from 3.7 billion years ago, then we can assume Earth was a very special exception.”