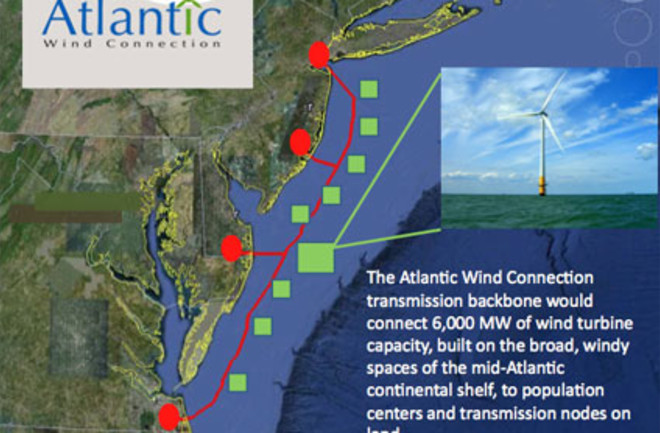 A huge offshore wind energy project took a leap forward today with the announcement that Google and the investment firm Good Energies are backing the mammoth underwater transmission lines that would carry clean electricity up and down the East Coast. The $5 billion dollar project would allow for wind farms to spring up all along the mid-Atlantic continental shelf. Google and Good Energies will both be 37.5 percent equity partners in the clean energy infrastructure project; the Japanese industrial, energy, and investment firm Marubeni will take a 15 percent share. The project, proposed by a Maryland-based company called Trans-Elect, would set up a 350-mile long energy-carrying backbone from Virginia to northern New Jersey, first allowing the transfer of the south's cheap electricity to the northern states, and later providing critical infrastructure for future offshore wind projects.

The AWC backbone is critical to more rapidly scaling up offshore wind because without it, offshore wind developers would be forced to build individual radial transmission lines from each offshore wind project to the shore, requiring additional time consuming permitting and environmental studies and making balancing the grid more difficult. [Official Google Blog].

The transmission line is planned to have enough capacity to carry the energy of five nuclear power plants (6,000 megawatts, which could power almost 2 million homes)--energy that eventually will come from offshore wind farms. These wind farms will be situated in federal waters more than 10 miles from the shore, where the huge towers would barely be visible.

“Conceptually it looks to me to be one of the most interesting transmission projects that I’ve ever seen walk through the door,” said Jon Wellinghoff, the chairman of the Federal Energy Regulatory Commission, which oversees interstate electricity transmission. “It provides a gathering point for offshore wind for multiple projects up and down the coast.” [The New York Times].

Construction is scheduled to start in 2013. The first section of the project, a 150-mile stretch between southern New Jersey and Delaware, could be completed in 2016 at a cost of $1.8 billion. From there, the backbone would be expanded to two more nodes, in northern New Jersey and Virginia, and offshore wind farms can be added, to provide power from the strong and steady winds that blow over the ocean. The complete project will not finish until at least 2021. Trans-Elect estimated the complete cost of the project to be $5 billion, plus permit and financing charges. But there are a lot of unknowns.

Industry experts called the plan promising, but warned that as a first-of-a-kind effort, it was bound to face bureaucratic delays and could run into unforeseen challenges, from technology problems to cost overruns. [The New York Times].

Google sees the project as a step towards building a "superhighway for clean energy," enabling the East Coast to connect to the potential 60,000 megawatts of wind energy that could theoretically be harvested from Atlantic Ocean winds. Says Google:

We believe in investing in projects that make good business sense and further the development of renewable energy. We’re willing to take calculated risks on early stage ideas and projects that can have dramatic impacts while offering attractive returns. [Official Google Blog]

80beats: Google and GE Team Up to Save the U.S. Power Grid