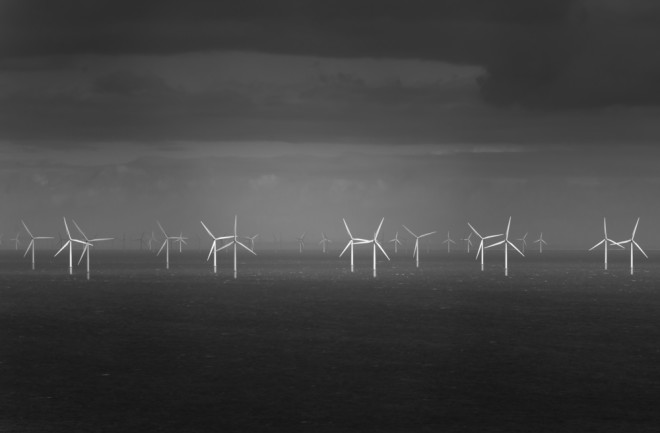 Wind turbines in the Irish Sea. (Credit: Valdis Skudre/shutterstock) These days, offshore oil and gas platforms, harbors, breakwaters, and offshore turbines, litter coastal areas. Artificial structures now alter more than 50 percent of some natural coastlines in Australia, the United States and Europe. The noise and the risk of collision raises concerns for marine life. But the human-built structures benefit wildlife, too. Now researchers have discovered that wakes created by an offshore turbine produced a dining hotspot for seabirds. The discovery shows that both building and removing offshore structures could have far reaching impacts on marine life. “We are living in an era of intense marine urbanization,” said Lilian Lieber, a marine ecologist at Queen’s University Belfast in the United Kingdom, who led the new research. “We need to make sure that we install and operate [offshore] structures in a way that minimizes potential harm to marine life and entire ecosystems.”

Europe alone has installed more than 4,000 grid-connected offshore wind turbines. One consequence of installing offshore structures in places where water moves swiftly is that they create wakes, explained Lieber. When water flows past an island, rocks or pier pillars, it spawns turbulent swirls of seawater. Fish get moved around in these rough patches and end up closer to the surface, making them easy targets for seabirds. “The wake can mix up material throughout the entire water column, acting like a prey conveyer belt for the seabirds,” Lieber said. Terns — seabirds that look similar to seagulls but with an extensive black cap and slim, straight bill — rely on wakes to catch fish. The birds only hunt at the water's surface. The researchers wanted to see how attractive a man-made wake proved as tern hunting grounds compared to naturally made wakes.

Lieber and her team investigated three wakes in the Narrows, a tidal channel in Strangford Lough, Northern Ireland, that empties into the Irish Sea. It's a human-built wake created by the remaining tower of a decommissioned tidal energy turbine, and two natural wakes that form from an island and a whirlpool. The researchers used drones to track individual terns as the birds foraged for fish over the three sites. They found the seabirds hunted for prey at all three wakes, but the man-made wake was the terns’ favorite. Tern numbers were highest at the wake made from the turbine tower, the researchers report today in the journal Communications Biology. “Localized wakes have been shown to attract marine top predators elsewhere, but this is the first evidence that wakes from man-made structures have similar, if not even greater effects,” Lieber said. The findings mean, “The addition of more offshore structures, and subsequent removal, may have a larger ecological impact than previously thought,” she added.