Off The Menu: Using Restaurants To Fill In Missing Fisheries Data

To manage modern fisheries, scientists have to quantify and monitor populations of animals that live hidden in the vast depths of our oceans. Simply getting the data needed to get a glimpse of what is there now can be difficult, but it's downright maddening when they try and look backwards to understand how populations of species have changed over time. Some areas have detailed catch records—others, don't. Sometimes you get a few good decades of government data followed by long gaps in information. But that doesn't mean the data aren't out there; sometimes, information is hiding where you least expect it. Scientists have collected fisheries data from photographs, newspapers, and local cultural leaders. Now, a trio of ecologists have tapped another unexpected resource to fill in a 45 year gap in fisheries data in Hawaii: restaurant menus. Here in Hawaii, it takes a combination of methods to understand fisheries populations over time. Before the Western World arrived, the native Hawaiians had remarkably sustainable fisheries. Piles of ancient shells and fish bones, called middens, give clues to what species were eaten and in what quantities. These, combined with human population estimates and per capita consumption rates, allow scientists to understand the success or failures of ancient fisheries management practices. 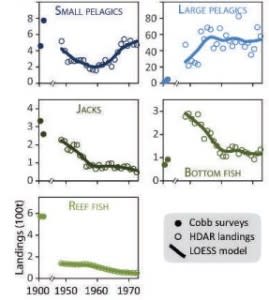 Hawaiian fisheries data showing large gap in information between 1900 and 1948. Figure 1b from the paper. More modern communities don't have middens; instead, scientists rely on catch statistics taken from commercial fishermen to evaluate what species were fished and how heavily. The problem is, these communities haven't always been great about collecting data. In Hawaii, there are catch records for a few years in the early 1900s from the US Fish Commission. Starting in 1948, the state's Division of Aquatic Resources, a part of the Department of Land and Natural Resources, took over. But between the early 1900s and 1948, quantitative data are scant. So what do you do if you don't have traditional statistics? You think outside the box. "Market surveys and government statistics are the traditional sources for tracking fisheries. But when those records don’t exist, we have to be more creative," explained lead author Kyle Van Houtan from Duke University's Nicholas School of the Environment. He along with co-authors Loren McClenachan from the Environmental Studies Program at Colby College in Waterville, ME, and Jack Kittinger from Stanford University's Center for Ocean Solutions, turned to an untapped resource of information: vintage menus. 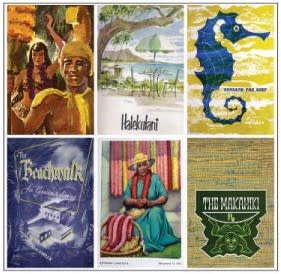 Examples of vintage Hawaiian menus used in the study. Figure 1a from the paper. Vintage Hawaiian menus are known for their beautiful artwork and are highly prized by collectors. "Most of the menus in our study came from private collections. They were often beautifully crafted, date stamped and cherished by their owners as art," said Van Houtan. "The point of our study is that they are also data." "Restaurant menus may provide a recent analog to middens," explain the trio in their recent letter in Frontiers in Ecology and the Environment, "given that they document seafood consumption over time and potentially the availability and value of different species in the past." "Restaurant menus represent an intriguing data source with the potential to fill existing knowledge gaps and measure long-term ecosystem changes," they write. The team analyzed 376 vintage menus from 154 different establishments in Hawaii. The collection of restaurants ranged from local hole-in-the-wall eateries to the most posh tourist hotels of the time, and spanned more than forty years, from 1928 to 1974. These data were used to supplement the official fisheries data to infer changes in the availability of different species, classified into five ecological groups: small pelagics, large pelagics, jacks, bottom fish, and reef fish. 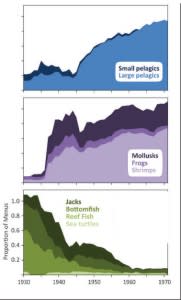 Percentages of different ecological guilds on vintage Hawaiian menus. Figure 1c from the paper. Prior to 1940, nearshore species like reef fish, jacks and bottom fish were frequent staples on Hawaiian menus. But in the decades that followed, they all but disappeared, replaced by large pelagic species like tuna reeled in with more modern fishing techniques. By 1970, 95% of the menus contained these massive, offshore species. The team's analysis of landings records revealed the dropping of reef fish from menus was concurrent with known declines in wild populations, suggesting the menus go beyond consumer preference to reflect real changes in the ocean. Next, the scientists would like to include pricing information from the menus in the analysis as well as other non-traditional data sources like photographs for even fuller detail. But this preliminary study reveals that even something as simple as a menu can tell us a lot. "Restaurant menus are an available but often overlooked source of information...perhaps a modern equivalent to archeological middens, in that they document seafood consumption, availability and even value over time," explained McClenachan. “This research demonstrates the tremendous wealth of useful information that is often hidden away in people's attics."