Ocean bacteria glow to turn themselves into bait 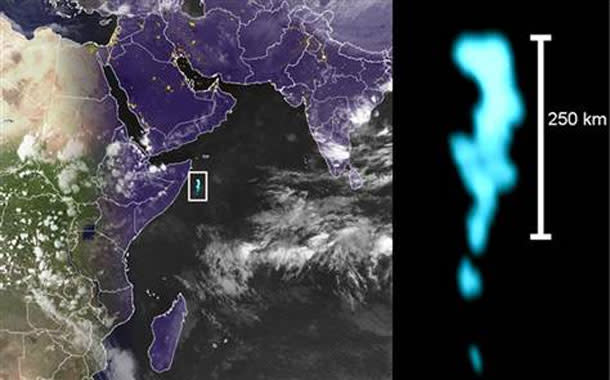 On 25 January 1995, the British merchant vessel SS Lima was sailing through the Indian Ocean when its crew noticed something odd. In the ship’s log, the captain wrote, “A whitish glow was observed on the horizon and, after 15 minutes of steaming, the ship was completely surrounded by a sea of milky-white color.” The eerie glow appeared to “cover the entire sea area, from horizon to horizon . . . and it appeared as though the ship was sailing over a field of snow or gliding over the clouds”. The ship took six hours to sail through it. These glowing seas have featured in sailor stories for centuries. The crew of the Nautilius encountered the phenomenon in Jules Verne’s Twenty Thousand Leagues Under the Sea. And in 2006, Steven Miller actually managed to recover satellite images of the very same patch seen by the crew of the SS Lima – it stretched over 15,000 square kilometres, the size of Connecticut or Yorkshire. The glowing waters are the work of bioluminescent bacteria – microbes that can produce their own light. They are found throughout the oceans, although usually in smaller numbers than the giant bloom responsible for the SS Lima’s sighting. In many cases, they form partnerships with animals like fish and squid, taking up residence inside their hosts and paying their rent by providing light for navigation or defence. But many glowing bacteria live freely in the open ocean, and they glow nonetheless. Creating light takes energy, and it’s not something that’s done needlessly. So why do the bacteria shine? One of the most common answers – and one that Miller proposed to explain his satellite images – is that the bacteria are screaming “Eat me!” at passing fish. A fish’s guts are full of nutrients, and it can carry bacteria across large distances. The bacteria, by turning themselves into glowing bait, get a lift and a meal. This idea has been around for more than three decades, but it has never actually been tested. Margarita Zarubin from the Interuniversity Institute for Marine Sciences has finally done so. Zarubin placed a transparent bag full of glowing bacteria (Photobacterium leiognathi) at one end of a large seawater tank. In the other end, she placed a bag full of mutant bacteria, which she had engineered to lose their light. The tank was full of zooplankton – small, drifting sea creatures including fish larvae, jellyfish, crustaceans, and more. Within just 15 minutes, most of these drifters had gathered round the glowing bag and ignored the dark one. Zarubin thinks that the shrimp and other zooplankton aren’t out to eat the bacteria themselves. Instead, they’re after what the microbes are sitting on. The bacteria cluster around bits of food floating around the ocean. They only glow when they gather in enough numbers, so their light is indicative of a big enough morsel. If Zarubin allowed the zooplankton members to actually eat the bacteria, they too started to glow. Shrimp will start to shine after just ten seconds of swimming in a soup of P. leiognathi. The bacteria clearly survive being eaten, and glow from within the shrimps’ guts. That can be lethal for the shrimp; its newly glowing guts attract larger predators like fish. Dark shrimp sneak by undetected, but glowing ones are almost always eaten. And the bacteria survive a trip through fish guts as well – Zarubin found that fish which eat glowing shrimp also expel glowing faeces. For the zooplankton, eating glowing bacteria is a tricky trade-off. Zarubin thinks that the benefit of eating rich food in an otherwise empty ocean might outweigh the cost of attracting hungry fish. For the bacteria however, the benefits are clear: they get to bathe in the slosh of nutrients within a fish’s guts, and they get to travel a thousand times further than they could manage on their own. Reference: Zarubin, Belkin, Ionescu & Genin. 2011. Bacterial bioluminescence as a lure for marine zooplankton and fish. PNAS http://dx.doi.org/10.1073/pnas.1116683109Image by Steve Miller More on bioluminescence: