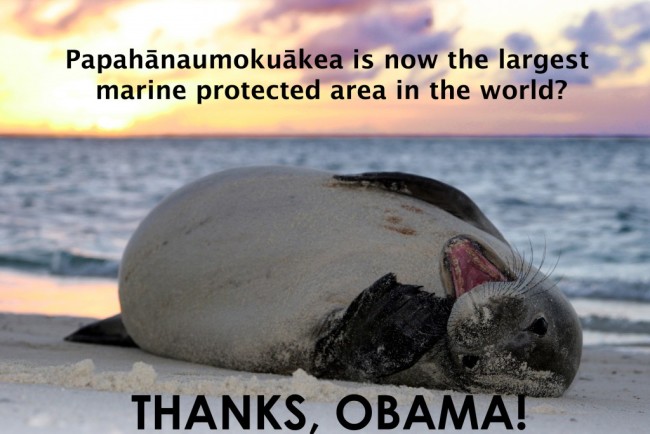 Photo by Mark Sullivan Hawaiʻi is now home to the largest marine protected area on the planet. Again. Today, White House officials announced that President is acting upon the proposed expansion to the Papahānaumokuākea Marine National Monument. The expansion has been a hot button issue in the islands since its proposal in January. As Governor David Ige noted, it has been the source of “tremendous” debate, especially due to the exclusion of fishing from the expanded waters. The fishing industry fought hard against the proposal, leveraging TV ads, social media, town hall meetings and in-person testimony in Washington and Honolulu to prevent the expansion. But the pro-expansion movement has been resilient. Bumper stickers, signs, bookmarks and t-shirts with the hashtags "#ExpandPNMN" and "#GoBigObama" have been everywhere on Oʻahu. A flurry of town hall meetings, educational sessions, news conferences and media interviews rallied support. Led by The Pew Charitable Trusts' Global Ocean Legacy program, the pro-expansion movement garnered more than 1,409,000 letters and signatures of support, including more than 1500 coral reef scientists that voiced their support during the International Coral Reef Symposium in Honolulu in June. "This decision is scientifically supported and provides substantial hope of leaving a legacy of ocean resources and benefits for future generations," the scientists' letter stated. Ultimately, the President agreed. He will be visiting the islands next week to address leaders from the Pacific Island Conference of Leaders and the IUCN World Conservation Congress. 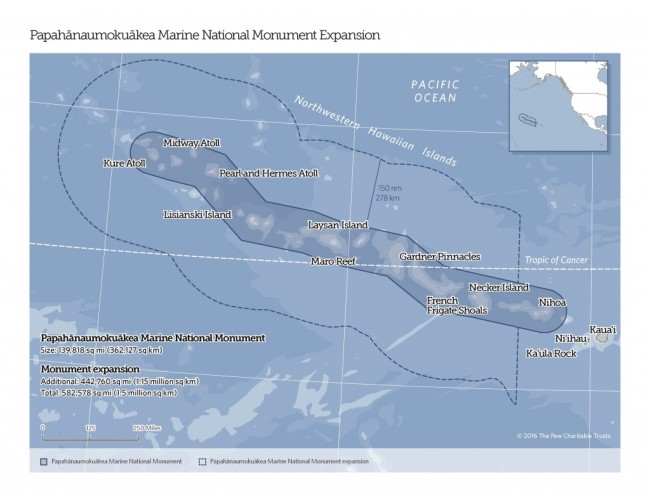 President Obama's proclamation adds an additional 442,760 square miles (1.15 million square kilometers) to the marine reserve, nearly quadrupling its size. But in addition to expanding the protected area, the President's announcement also included a special stipulation, which was requested by Governer Ige and Senator Brian Schatz: that the Office of Hawaiian Affairs be named co-trustee of the monument, giving Native Hawaiians more control over the fate of this culturally important monument. Native Hawaiian leaders were especially in favor of expansion, as the Northwestern Hawaiian Islands hold a special place in Hawaiian culture. "Papahānaumokuākea is critically important to Native Hawaiian culture—it is our ancestral place, the birthplace of all life," said Sol Kahoʻohalahala, a seventh-generation Hawaiian from the island of Lanai and a member of the Northwestern Hawaiian Islands Native Hawaiian Cultural Working Group, in a press release. "The expanded monument will serve as a conservation, climate, and cultural refuge for my granddaughter and future generations." "Papahānaumokuākea is critical to Native Hawaiian spiritual wellbeing, and this action by the President helps revive our connection to our kūpuna islands and reinforce our understanding of Hawai’i as a contiguous spiritual and cultural seascape," said Office of Hawaiian Affairs Ka Pouhana/Chief Executive Officer Kamanaʻopono Crabbe in a statement. "The elevation of OHA to a Co-Trustee position rightfully places the Native Hawaiian voice at all levels of decision making in the governance of Papahānaumokuākea. This has been a ten year effort to achieve this position and this success marks the beginning of a new era of collaboration for the co-managers of the area to fulfill the tremendous responsibility of protecting and caring for this sacred place." "This is a historical moment for Hawaii and the world," said William Aila, Jr., one of the Native Hawaiians leading the effort for expansion, and who has been involved in establishing protections for this area for more than 15 years. "This is a bold move, and it took a bold President–born and raised in Hawai‘i—to address the serious issues of climate change, the dire state of our oceans and recognizing the cultural significance of the area for Native Hawaiians. Mahalo, Mr. President." The expansion builds on the conservation initiative began by Theodore Roosevelt, which has included actions from six presidents (three Republicans and three Democrats). In June of 2006, when President George W. Bush gave birth the the marine national monument with Presidential Proclamation 8031, Papahānaumokuākea was the biggest swath of ocean to be protected by any government. "Papahānaumokuākea inspired an international movement to safeguard large areas of ocean and create the world’s first generation of great parks in the sea," said Joshua S. Reichert, an executive vice president at Pew who oversees strategy for its Global Ocean Legacy project. In the decade since, there have been many similar large-scale marine protected areas enacted worldwide, including nine which are larger than the original Hawaiian monument. But the President's declaration today bring the title of biggest MPA home to Hawaii. https://www.youtube.com/watch?v=6ZG2Q-B6LvQ More than 7,000 marine species call the expanded monument home, including endangered whales, seals, and sea turtles as well as the longest-living marine species in the world—black coral—the oldest of which, estimated to be 4,265 years old, is now protected under the expanded monument. Because of their cultural and biological significance, the Northwestern Hawaiian Islands were designated as a UNESCO World Heritage Site in 2010. "We continue to discover species new to science every time we visit this incredible area," said the Bishop Museum's Richard Pyle, a well-known scientist in the islands who has helped document the wildlife in the monument for over thirty years. "The expansion of the Monument is a critical and necessary step to protect this vast and unique region not just from existing threats, but from future impacts over the decades and centuries to come. President Obama has demonstrated bold leadership in recognizing the importance of saving biodiversity not just for our generation, but the entire future of humanity. His decision to expand the Monument restores my hope that we may yet overcome the major environmental challenges we now face." "In an era of mounting climate change impacts on both global landscapes and seascapes, and with advances in technology that allow the exploitation of resources from the most isolated islands and deepest corners of the ocean, this well justified application of the Antiquities Act to protect resources of great scientific, cultural and historic value comes at a critical time," noted Robert Richmond, Research Professor and Director of the Kewalo Marine Laboratory at the University of Hawaiʻi at Mānoa. "The only refuges left on this earth are those we choose to set aside and protect. This bold move is a true sign of proactive leadership that will help insure a legacy of vital bio-cultural resources for Hawaii, the Pacific and the world." "By expanding the monument," Reichert also said, "President Obama has increased protections for one of the most biologically and culturally significant places on the planet." Thanks, Obama!